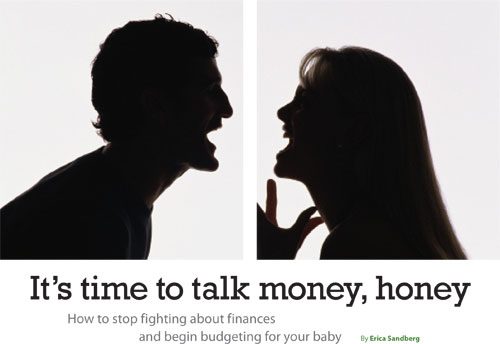 Think you’re the only couple who bickers about the cost of strollers and car seats? Hardly—money clashes are the rule rather than the exception, particularly when you’re pregnant. All those costly new expenses colliding with your individual budget beliefs and…boom! Fortunately, you can bring the battle back down to Earth with a few simple guidelines.

Your way or the highway
How can a duo with differing opinions move ahead? Think flexibility, says Kristin Harad, a certified financial planner and president of VitaVie Financial Planning in San Francisco, who specializes in helping parents-to-be manage their finances. She urges her clients to get past their own wants and consider “alternatives that fall in the middle.”

Take Seattleites Amanda and Jonathon Foley, who are expecting their first baby in three months and can’t seem to agree about childcare. Amanda’s campaigning for a nanny, believing the individual attention outweighs the high cost, while Jonathon thinks day care is the better choice. It won’t just save them money today, he says, because with more children planned, the surplus dollars will help them stay strong budget-wise.

Complicating the issue is the fact that they can afford a nanny—if they trim their expenses. But they’d have to agree about what to cut out. “Jonathan loves golf and skiing; I love nice dinners with great wine—different things are important to us,” Amanda says.

Although the Foleys talk, their discussions haven’t gone anywhere. To make a decision, they need to be willing to compromise, Harad says. A team approach, with finding good care for baby as the ultimate goal, can help them weigh the advantages and pitfalls of each option—or even come up with new ideas that can work.

If the Foleys do opt for a nanny, they’ll have to commit to a budget. But this may not be as tough as it sounds: Spending weekends with baby at home will seem a lot more relaxing than an evening out, once the Foleys are on night duty.

And if they choose the cheaper alternative? They’ll need to follow through. “Unless they automatically direct the difference into a savings account,” Harad warns, “chances are they won’t save [the extra] for future children or other investments.”

He won’t shop…and you can’t stop
Sometimes even seemingly simple financial decisions can send a couple into the conversational boxing ring. The gloves are on for Hugh and Amy Weber of Sioux Falls, SD. With their baby’s due date just two months out, they’ve yet to buy many of the basics. What’s holding up the process? Their opposing ideas about shopping itself.

According to Hugh, Amy wants all the necessities now, before the baby is born, while he’d prefer to buy as they go along. These conflicting positions have turned Babies“R”Us into a battlefield. “Even registering was an issue,” Hugh recalls. Browsing for strollers snowballs into a long, strained discussion. “The crib purchase was the major crisis. We were standing in the middle of the store arguing about which to buy.”

Both spouses want to move forward. “We don’t have to agree,” stresses Hugh (who even started a blog—dudetodad.com—for support), “but we do need to make decisions. It can’t be ongoing, unproductive arguments!”

So how can they reach the cash register tiff-free? First, they need to discuss how much they’re comfortable spending on baby’s ¬start-up items. “When you agree up-front on money priorities,” Harad says, “you free up the constant questioning that can escalate even the smallest spending choice.”

Then, Harad suggests the Webers list their top must-haves and decide together which of these will fit in their budget. They can work around squabbles by delegating purchases—for example, he selects the high chair, she picks the baby monitor.

Brace yourself for major income adjustments
Yet another sensitive topic is position transition—when one parent decides to work less. After her son Noah was born, Denise Zimber of Boston traded her well-paying but time-consuming career for a part-time job; hubby Drew kept working full time.

It’s had a dramatic impact, even driving Denise to the message boards at BabyCenter.com for support. “I’m used to being financially independent and it’s been a hard transition to rely on my husband,” she explains. Although she’s wrestling with her loss of independence, she doesn’t bring it up to avoid a fight. “He’s willing to talk,” she says, “but gets defensive when it comes to making changes.”

Making the problem worse is that the Zimbers have separate accounts. And since Drew’s salary is unchanged, his balance is steady—but Denise’s has dropped off. Bad feelings build when she asks for money. “I want to be back to the point of having the same amount,” she says, “not account for every dollar I spend!”

Simple solution to the rescue: Harad proposes the Zimbers deposit every paycheck into a shared account and agree on equal monthly allowances for husband and wife. That money goes into their separate accounts and can be spent without strings.

Denise should also voice her distress—but with a purpose rather than just problems. Drew will be more open if she creates a plan for the future that includes going back to work full-time. Meanwhile, Denise has to stop thinking “his and hers” and instead “ours.” “The Zimbers are a family now,” Harad says, “they need to start acting as a unit.”

Schedule peace talks
No one wants to enter into parenthood fighting about money. Bring about a cease-fire by reviewing your finances at least once a month. Mark “money dates” on the calendar and treat them like a team meeting at work—be frank, kind, and respectful, and try to enjoy the process. You’re bound to learn a lot about each other. 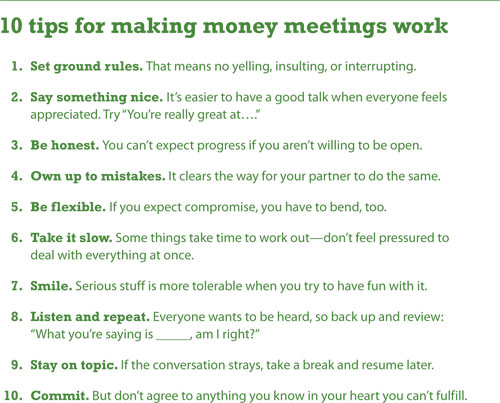 Erica Sandberg is the author of Expecting Money: The Essential Financial Plan for New and Growing Families. She’s also a certified personal finance planner, reporter for CreditCards.com, and mom to 6-year-old Lillian.