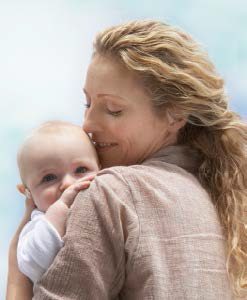 Is it baby bliss or infant overload?

Some moms’ idea of nirvana is never being separated from their babies, not for one second, day or night.  For others, this concept seems like cruel and unusual punishment, for both baby and mom.But before you start running for the hills or buy baby slings in every color of the rainbow, read on to learn more about this popular trend.  There’s more to it than being joined at the hip.

During my first pregnancy, I went headlong into information overload.I googled.  I quizzed other parents.  Books from Amazon spilled out of my mailbox.  The more I tried to absorb, the clearer it was how much I didn’t know.  Like about breastfeeding.  And where the baby would sleep.  That was a new one to me—I thought babies slept in cribs, end of story.  And what in the world was “baby-wearing”?

I’d accidentally stumbled onto the world of “Attachment Parenting.”

WHAT IS ATTACHMENT PARENTING?

Attachment Parenting—known by the shorthand AP—is not easily defined.Generally speaking, it’s a parenting philosophy “that nurtures the bonds between parents and their babies,” says Lysa Parker, co-founder of Attachment Parenting International and author of Attached at the Heart: 8 Proven Parenting Principles for Raising Connected and Compassionate Children.  According to scientific “attachment theory,” babies have an innate drive to form a close attachment to a primary caregiver.  Applying this theory to parenting, “attached” babies are secure babies.Says Parker, “Securely attached children are happier, healthier, better behaved, and more successful in school.”

Attachment is forged by efficiently meeting all the baby’s needs.  Attentive parents learn to interpret their baby’s nonverbal cues to meet her needs before—this is the important part—she cries.  It takes some practice, but infant body language is remarkably revealing, Parker says.  “In our culture we tend to wait until our babies are crying before feeding or picking them up.But if we pay close attention, we can see that baby is giving us signals about what he wants long before that.”

Stephanie Precourt, a self-described AP mother of four in Indiana, carried her youngest baby, Ivy, in a sling as she went about her day.  The closeness of baby wearing, as it’s known in AP circles, puts parents in tune with their babies.  “Knowing what your baby is trying t o tell you before he or she has words makes parenting so much easier,” says Precourt, who blogs at AdventuresInBabywearing.com. “Not only is Ivy happier and less fussy, but I feel like I’m doing a good job as a mother.”

The term Attachment Parenting is usually linked to the man who coined it, William Sears, M.D., and who pioneered this philosophy in the late 1970s. But AP is hardly new—in many ways, it’s as old as parenting itself. “Plenty of moms were AP before anyone ever heard of a baby sling,” says Carrie Lauth, a mother of four and host of NaturalMomsTalkRadio.Com, a weekly podcast about “instinctive parenting” (one of the phrases that bubbles up in AP discussions).

Sears also presents a set of guidelines— his latest version is the “7 Baby Bs”—that outline the over-arching theme of AP from his perspective. Attachment Parenting International’s Eight Principles of Parenting outline a similar philosophy. Although neither list is absolute, it’s safe to say that AP parents tend to make similar parenting decisions.

Like Precourt, these parents often “wear” their babies. They opt for breastfeeding over formula and nurse on demand long after the American Academy of Pediatrics’ recommendation of one year; some allow children to decide when to wean.  Many AP parents vaccinate their children as recommended, but some do so only selectively— and a few don’t vaccinate at all.  To facilitate night nursing and strengthening the family bond, AP parents practice bed-sharing, with one or more children sleeping in the same bed with their parents. AP parents say they practice “gentle discipline,” opting to redirect rather than scold or punish their children.  Sons of AP parents often aren’t circumcised; later on, older children are frequently home schooled.

Parents need not subscribe to all of these practices in order to consider themselves attached parents. If they opt out of bed-sharing, for example, keeping their baby close by in a bedside bassinet still allows them to respond throughout the night.  “AP is a philosophy and an attitude, not a checklist,” Lauth says.  “There are plenty of moms out there for whom, for whatever reason, breastfeeding didn’t work out. It doesn’t mean they’re not AP parents.”

AP IN THE REAL WORLD

Some parents fall into AP naturally, without planning.  On the other hand, expectations of AP don’t always turn out as envisioned.  Before her daughter, Indira, was born, Camille Pagán from Brooklyn, NY, had a good handle on AP from friends and family who practiced it.  “I liked—and still like—the notion of being available to my child when she needs me,” Pagán says.She bought a sling and figured she’d co-sleep at least part of the time .

Then Indira was born, and it was game time.  “She hated the sling from day one, even though she loved being carried in our arms,” Pagán says.  “I realized we both were happier when she got some downtime and hung out in her chair or swing for part of the day.” Bed-sharing was a bust too.  The entire Pagán family got more shut-eye when Indira stayed in a bedside bassinet right next to mom and dad.  (The American Academy of Pediatrics recommends a bedside bassinet as the safest way to co-sleep.)

Interestingly, the one AP idea Pagán wasn’t originally on board with—nursing on demand—ended up working out.  She had decided to stick to a feeding schedule when Indira was born, but to her surprise, she found it wasn’t necessary.They nurse when Indira wants, “and I haven’t turned into a human pacifier” as she’d heard AP naysayers warn.

This willingness to be flexible is the key to successful parenting, no matter your philosophy, says Daniel R. Brennan, M.D., a pediatrician at Cottage Children’s Hospital and at Sansum Clinic in Santa Barbara, CA.  As a certified lactation counselor, he tends to attract clients who lean heavily toward AP.  But he maintains that as long as you’re paying attention to your baby, there are many right ways to parent.“Babies have different personalities.  If a baby suddenly doesn’t sleep well or decides he doesn’t like to be worn or held closely, mom or dad shouldn’t feel like they’re doing something wrong.  If a mom has to go back t o work full-time, she can still be fully bonded with her baby.  Anything can work.”

It’s also important that the entire family be considered when making decisions.
“I’ve had dads come up to me privately for help, saying ‘co-sleeping’s not working for me.’ He might be worried about safety and would be more comfortable with the baby in a bedside bassinet.  Or his relationship with his wife might be suffering, but he’s afraid to say anything because he’s afraid of undermining the commitment to AP.” But Brennan says, if you’re doing what’s best for the baby, parents, and the family as a whole—even if the result isn’t what you planned—it’s still Attachment Parenting. 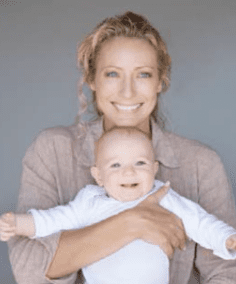 THE DOWNSIDE TO AP?

In some circles, certain aspects of AP— like not vaccinating and bed-sharing— are quite controversial.  Critics point t o Sudden Infant Death Syndrome (SIDS) as a bed-sharing risk; the health dangers of going unvaccinated; and the potential difficulty of removing older children from their parents’ beds.  But again, what matters most is that parents and baby are comfortable, so the family can maintain a sense of balance. There’s a reason “balance” is the final entry in both Dr. Sears’ and API’s guidelines lists.

Then there are the inevitable reactions of others.  Besides the criticisms already listed, peoples’ misconceptions about AP can make parents feel like they’re swimming against the current.  Katherine Schenck, an American mom living on a military base in Europe, shared a bed successfully— and happily—with her son until he was 8 months old.  “Everyone thought it was crazy to share a bed with him,” she says.  “They said he’d never sleep on his own.” Eventually, she gave in to the criticism and moved him to a crib.  “He was totally fine, but I was a basket case.  I had to keep going into his room to make sure he was breathing.”

If you decide to give AP a go, find parents who share your goals to build yourself a support system.  “We were never meant to raise children in isolation.  It’s important for new moms to develop their own extended families of like-minded friends and parents who their children will become familiar with,” Parker says.  Having a team on your side helps instill confidence in your parenting.

Most important of all: Remember flexibility and balance.  “Being flexible has not only made Indira happier,” Pagán says, “but it has made life for our whole family so much easier.”

Considered the founding father of Attachment Parenting, Dr. Sears is also a father of eight!

1. Birth bonding
2. Breastfeeding
3. Baby-wearing
4. Bedding close to baby
5. Belief in the language value of your baby’s cry
6. Beware of “baby trainers,” like those who suggest your baby should “cry it out”
7. Balance: knowing when to say yes and no

1. Prepare for pregnancy, birth, and parenting
2. Feed with love and respect
3. Respond with sensitivity
4. Use a nurturing touch
5. Ensure safe sleep, physically and emotionally
6. Provide consistent and loving care
7. Practice positive discipline
8. Strive for balance in personal and family life

How AP Do You Want to Be?

To learn your ideal level of Attachment Parenting, choose the number between 1 and 10 that most accurately rates your parenting goals and abilities in each category.  When you’re done, add up those numbers and read your corresponding AP profile. 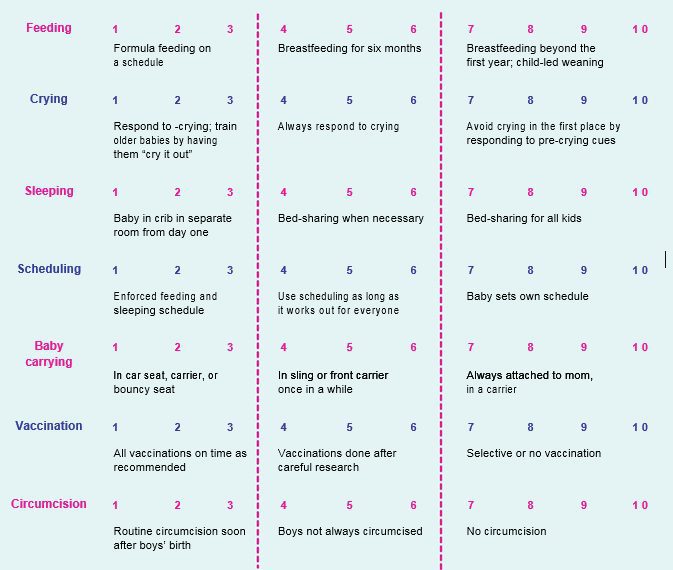 7–29: What worked for your mother will work just fine for you. You’ve been carrying baby around for 40 weeks and that’s just plenty, thank you very much.

30–49: All things in moderation.  After all, breastfeeding is free and these days baby carriers are convenient as all get out. There’s nothing wrong with a little together time.

50–70: Having a baby was not a casual decision for you, and you’re set on doing this motherhood thing right. A happy baby means a happy mommy.

Sandra Hume has written features for Pregnancy on pre-eclampsia and preterm births.  Her work has also appeared in Parents and Parenting magazines.