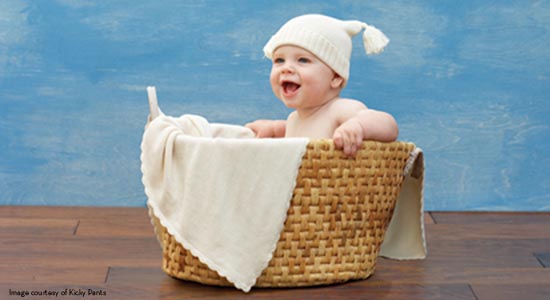 Out of the corner of your eye you see some sticky fingerprints on the door frame into your baby’s new nursery. You grab a sponge and clean the frame and the door, but then you spy a tiny tear in the wallpaper in the hallway. You can’t stop yourself from giving it a tug, which makes it worse. Two hours later—exhausted but somehow energized—you’ve stripped every inch of paper off the walls.

The next morning, you toss some bread into the toaster and pause to peer into the slots. Where did all those crumbs come from? You try tipping the toaster over the sink and banging on the back to dislodge them, but when that doesn’t work, you fetch a roll of paper towels and your Simple Green. After the toaster, you start wiping out all the appliances in the kitchen…ending with a complete evacuation of the refrigerator.

Or, you’ve laundered the new baby clothes and you’re putting them away. You notice a few things aren’t folded properly, so you start removing them. By the time you finish at 2 a.m., you’ve refolded the contents of every drawer in every dresser in the house…and sorted them by size, color, and season.

No, silly, you’re not losing your mind—although your husband may think otherwise. You’re nesting!

“It’s part of the emotional preparation or reaction to what pregnant women are going through,” says Glade B. Curtis, M.D., author of the successful Your Pregnancy series of books. “A mom-to-be has been gaining weight, feeling uneasy, and now she’s on the verge of this miraculous thing. Only she doesn’t feel so good and has to cope with all these unusual emotions.”

That’s when the unique and irrational behaviors arise: Throwing away perfectly good sheets because they aren’t white enough, disinfecting the screws attached to the knobs in kitchen drawers, cleaning the bathroom floor with a toothbrush.

When you reduce it to the ridiculous, the nesting urge can be pretty funny. But it’s also very natural. The extra burst of energy is Mother Nature’s way of reminding you that things are changing. “There’s actually a biological element to all this,” Curtis says, “and a psychological element to it as well. As you get to the verge of labor, there’s uncertainty and fear and every woman has a different way of reacting to it.”

A mom’s nesting instinct generally kicks in around the fifth month of pregnancy. It’s a primal instinct; females of the animal kingdom—birds are the most obvious examples—are all equipped with this same impulse. The act of nesting provides the illusion of control and is often seen at the onset of labor when it occurs close to 40 weeks of pregnancy.

Most often, nesting takes the form of tying up the loose ends of old projects, better organizing the world into which your new baby will arrive, and clearing room for him. Some women become homebodies and retreat into the comfort of home and familiar company like a brooding hen on her eggs. Some others totally shut down—they stop doing things entirely. Whatever the case, it’s a time of significant, if temporary, behavioral changes.

Sometimes the nesting urge can also be seen as an uncontrollable desire. Audrey Vernick, a mother of two in New Jersey, doesn’t remember nesting at all. But that, she says, is only because it happened while she was in an altered state. “I have no memory of nesting—it’s not an in-the-moment realization,” she says. “I think you only realize you’re nesting a few days after you’ve done something crazy. It’s like being in a zone where things are happening that you have no control over.”

“It’s all emotional. The hormones are raging,” says Beatrice Pila-Gonzalez, owner of B. Pila Design Studio in Miami. “When I had my daughter, I fell in love with this strange color I had never liked before. Apparently, the color is one that women like when they’re pregnant, and I decorated with it. Immediately after I gave birth, I hated it!”

Kelly Jarbeau, a Rhode Island mom, got the nesting bug while expecting her fourth child. “I bent over to clean something one of my kids spilled and saw underneath the microwave,” she says. “Gross! I turned into an absolute lunatic! I took everything in the kitchen apart because it grossed me out. I can’t live like that, not with a new baby coming.”

Some things just have to be done before the baby comes. But not all of them need to be accomplished by the expectant mom. Often unwitting and (occasionally) unwilling participants, dads get reeled in, too. “You can’t avoid nesting when you’re living in the same house as a nester,” says Troy Nelson, a father of twin girls in Athens, GA. Troy’s wife, Amy, set up her graphic-design company, Paperlicious.com, as way to channel her nesting energy while she was on bed rest. “I believe women nest their entire lives, all year ’round,” Amy says. “If I decide I want something done or moved, I need it done right then. That’s where my husband comes in.”

My own first son, Grant, came three weeks early. The nerve! That was time I had set aside for, well, everything. One morning I was sipping a coffee thinking to myself, “Maybe I oughta get to some of those items on my wife’s ‘honey-do’ list.” A few hours later, I was in the delivery room holding a newborn. Yes, I was overcome by joy, but also by outright panic. I had yet to pick up the car seat or even assemble the crib. No one told me about nesting.

Curtis is quick to point out that panic isn’t the answer. “A partner or a spouse can be helpful in bringing common sense to the situation,” he says. “When a nester goes to the grocery store and buys everything in sight in preparation for the baby—but there’s nowhere to put it—the spouse has to step in and make sure the behavior stays rational.”

Often, Curtis adds, nesters tend to take on projects without thinking, and some of those projects, given nesters’ altered condition, may be unsafe. (See “Nesting Dont’s” below.) “Most of the activities that we’re talking about,” he says, “aren’t negative or dangerous. But sometimes nesters can engage in activities that may jeopardize the health of themselves and the baby.”

As a nursery designer, Pila-Gonzalez often deals with nesting moms. “When they’re designing a nursery, the inner child comes out and that’s a part of nesting, too. You hold the hopes and dreams of the child in your design decisions. It’s all a part of the nesting instinct; the imagination and fantasy that you want to express as a parent and a couple.”

Curtis emphasizes striving for balance between parents. “Don’t become too focused on certain activities, don’t get obsessed, and certainly don’t put your baby’s health at risk. Allow your partner to have a say in things, and together you can cope with the arrival of your baby.”

Ultimately, Curtis says, the urge to scrub, sort, sweep, fold, dust, wash, or paint will subside once baby’s born. This is a good thing—you’ll be pretty busy for the next 18 years or so.

Instead of running around the house like an OCD housekeeper on fast-forward, try channeling your nesting impulses into worthwhile activities. Here are three ways to get your nesting instincts going in the right direction.

Pack It
It’s never too early to get your bag ready for the hospital. Not only is it one less thing to worry about, it gives you a chance to pack it when you’re not frenzied. And don’t just put stuff you need in the bag; put stuff you want in it, too—like your favorite lipstick, a fabulous moisturizer, or a special soap.

Stock It
Instead of inane household chores, go stock up on the things you know you’ll need when you come home, like your regular brands of cleaning and paper products.