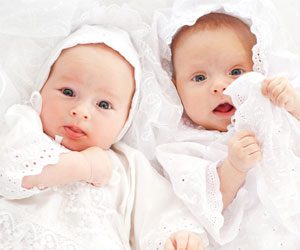 Give your newborn baby roots and a sense of story by taking name inspiration from one of these historical figures. Below, you’ll find the names of women who’ve left their mark through music, science, dance, and more:

Annie: A winning sharpshooter made famous as a teenager in the early 1900s, Annie Oakley is remarkable for breaking out in a male-only field in a time when women were confined to home.

Frida: Frida Kahlo was a world renowned Mexican painter in the 20th century.

Amelia: Give your baby girl the name Amelia and she may just turn out to be a great adventurer. Amelia Earhart is remembered for breaking barriers as the first woman to fly solo across the Atlantic Ocean.

Isadora: Isadora Duncan was an American ballerina who danced to great acclaim in the early 1900s.

Ella: Want to raise a strong-willed leader? Name your baby Ella and she may be off to a good start. Ella Baker was an influential Civil Rights activist who worked right alongside Martin Luther King, Jr.

Marion: As an expectant parent, you’ll have a lot of gratitude for Marion Donovan soon enough. In 1950 she invented the first disposable diaper.

Katherine: Katherine Blodgett was a 19th century physicist and inventor, whose pioneering inventions have been used in eyeglasses, cameras, and telescopes.

Rosa: Famous for refusing to give up her seat on an Alabama bus, Rosa Parks is a legendary Civil Rights hero.

Do any of these beautiful baby girl names strike a chord with you? Let us know in the comments below! And stay tuned for a baby boy name list inspired by great men in history!