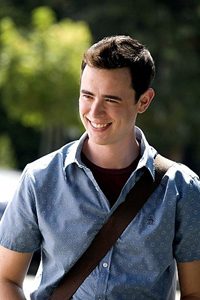 According to one age-old adage, a woman becomes a mother the moment she discovers she's pregnant, but a man doesn't become a father until he sees his child. Although we can't say for sure if this rings true for Colin Hanks, it appears as though his daughter Olivia Jane's arrival did change his life completely.

The 33-year-old actor became a first-time parent earlier this year with his wife, Samantha Bryant. According to Hanks, having a child has widened his emotional range – making him not just a better actor, but a better person.

"Since our daughter joined us the spectrum has widened," he tells Reuters. "My job is to recreate moments between people and when you're able to look at moments differently, you get deeper meaning in things."

The young father adds that while having a baby can be exhausting, it's all worth it when the child looks at you with recognition for the first time.

"A baby’s existence for the first three months is a one-way street … so the first moment when you’re actually able to do something and they acknowledge your presence, that’s a big deal. A very big deal," the actor says.