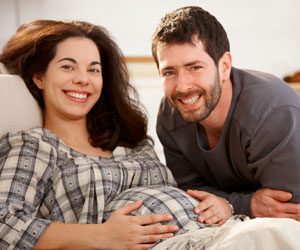 It is just one of those things, guys; you’ve gotta do it. While attending the first pregnancy-related ob/gyn visit with your wife does not sound like a backbreaking show of support, you should at least offer to go. And when your wife says that she doesn’t need you to go, it is wise to insist that you want to. This simple two-hour commitment (appointment, then you take her to lunch) blurs the barriers that separate men and women. I know what you’re thinking, Who wants to cross those lines? Those lines help dictate societal order. I am comfortable being a caveman! And even if you feel as uncomfortable as I did, she will never forget you were there.

To get you prepared for what you are about to encounter, I’ll briefly describe what transpires at the first pregnancy ob/gyn exam. I don’t necessarily want to relive this, but if someone had told me what to expect, I wouldn’t have been so nervous.

Before I begin, I have one complaint. Where’s women’s lib when a guy needs a magazine to read at the ob/gyn’s offce? There are no “guy” magazines to read. Where’s Sports Illustrated? All I can find are People and Pregnancy. After three zillion questions with the doctor, you’re ushered into a room where your wife immediately tears of all of her clothes except for her bra, and leaps nimbly up onto the table. She then covers herself with a paper blanket. This is when you start with the small talk. “How ’bout them Packers?” is what I said. (It went over like a lead balloon—she’s a Niners fan.) The doctor enters and continues her conversation with you, interspersed with commands such as, “Relax, and scoot down, give me your heels.” Then the doctor extends this groovy, 6000-watt gyno light from the wall to light up the entire southern region. It’s also a heat lamp, I was informed later.

Armed with a modicum of social etiquette, I quickly move to the non-business end of the small room. The doctor then dons examination gloves, lubricates one and proffers up with this steel, 7-inch duckbill-shaped ratcheted apparatus. Casually the doctor says, “This is going to be a little uncomfortable, you are going to feel a little pressure here.”

It’s true. The appointment was uncomfortable and I did feel the pressure until the doctor asked, “How ’bout them Rams?” Random thoughts raced through my mind: That must’ve been the doc’s cool Acura Legend with big fat tires in the parking lot and Any guy that’s not at least 51% scared to death pondering childbirth and fatherhood is absolutely, certifiably crazy.

Congratulations, you made it

Going with her was all worth it though. During our lunch, my wife looked at me with big, loving eyes and said to me, “Thank you for coming with me today.” She genuinely meant it. Since that great day, I’ve spoken to many fathers who chose to not participate in this aspect of the pregnancy, and far more guys who vowed not to go when the time came. One friend swore that he didn’t even want to be in the delivery room during the birth of his child. All of these feelings are natural, and as each couple is different, there’s no right or wrong.

Well, actually, there is. Your wife is right with whatever she decides is the best approach and, if you disagree with her—you guessed it!—you are wrong.

— Grant Eppler is the author of Every Guy’s Guide as to What to Expect When She’s Expecting and a contributor to GreatDad.com.