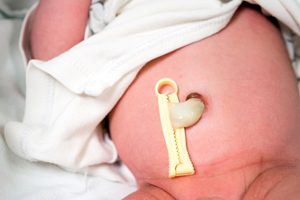 Of all the contentious items of pregnancy and childbirth, who knew choosing when to cut the umbilical cord would inspire so much debate? First, let’s back up. When babies are born, they are still connected to mom by this cord – and the cord must be cut and clamped shortly after birth to separate the two.

In the 1950s, it was considered early to clamp the cord 1 minute post birth, and late after 5 minutes. Nowadays, it’s customary to do so immediately, usually 15-20 seconds after a baby is born. However, a new study out of Spain suggests that women and their health care teams wait two minutes to cut, until after the cord has stopped pulsating. The World Health Organization echoes this advice, encouraging moms to wait 1-3 minutes before making a snip.

This new research urging women to wait on cord clamping posits that there are still nutrients to be found inside the cord, even after baby has taken his or her first breath. By waiting, babies continue to receive blood from the placenta, which, according to WHO, may increase iron levels until 6 months of age.

Furthermore, in this study out of the University of Granada, doctors found that babies who had their cords clamped after 2 minutes of life had an increase in antioxidant capacity and a reduced level of inflammation caused by labor and delivery. In layman’s terms, the results of delaying cutting were significantly beneficial to newborn babies – and even helped them recover from trauma induced by birth.

Despite these findings, the American Congress of Obstetrics and Gynecologists has not endorsed delaying clamping universally. Citing worries over babies who may need resuscitation, ACOG states that putting off cutting the umbilical cord could jeopardize saving a newborn’s life. The organization also has concerns about a disease called excessive placental transfusion, which can lead to dangerously high levels of red blood cells for baby. This is of particular concern for women with diabetes, and those whose babies have suffered intrauterine growth restriction.

Talk to your doctor or midwife about including delayed cord clamping into your birth plan. WHO recommends all new parents wait to cut until the cord has stopped pulsating – except in the case where a newborn is in distress and needs resuscitating. According to new research, this simple step could lead to a healthier baby for months to come.