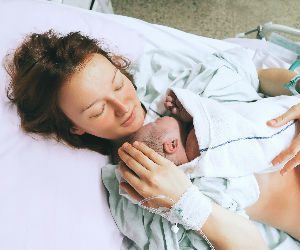 A new study published in the British Medical Journal serves to debunk your doctor’s advice that walking during labor leads to faster outcomes. Through a randomized trial of more than 3,000 first-time mothers, the research team out of the University of Birmingham in England studied the effects of two laboring positions.

All of the expectant mothers in the group shared similar pregnancy health profiles and were expecting single births. Forty percent of the group had labor induced. During the second stage of labor, each of the women received an epidural–with a low enough dosage to allow for physical activity. Half of the women were encouraged to walk during labor or assume a kneeling or upright position. The other half was instructed to lie down in bed.

The results are in

While the differences in outcome aren’t huge, those who lay on their sides throughout active labor experienced faster spontaneous births. In the United Kingdom, where forceps use is more prevalent, this study noted that the second group–comprising those who lay down–had a smaller likelihood of needing forceps during birth. Women in the first group–those who walked, knelt, or sat upright–had only a 35.2 percent chance of delivering without forceps; while 41.1 percent of those who lay down delivered forceps-free.

Sure, these numbers are small, but statistically they’re worth noting for any pregnant woman looking to shorten labor time. As the study’s lead author, Dr. Peter Brocklehurst, told the New York Times, “We’d recommend that women try to lie down on their sides when the cervix is fully dilated …most women want to have a spontaneous vaginal birth, so most will try to lie on their side if that gives them a better chance.”

Now, it’s your turn: What do you think of this recent study? Will it affect how you choose to labor? Chime in with your thoughts in the comments below.