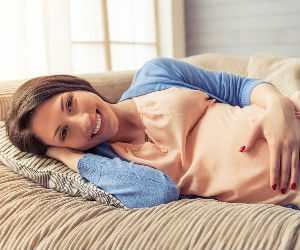 Kate Hanley of Brooklyn, NY, knew that pregnancy and weight gain go hand-in-hand, so it came as no surprise when she gained 30 pounds before giving birth to her daughter, Lillian.

Still, Hanley admits, “I was nervous about gaining tons of weight when I was pregnant. I made sure that the extra calories I consumed were fairly healthy and I tried not to let being pregnant be an excuse to eat whatever I wanted—but when I was really jonesing for a cookie, I definitely had one.”

It’s tempting to be a little less vigilant about your eating habits now that you’re pregnant. Carrying a baby is a convenient excuse to super-size your order or drop a few quarters in the vending machine for a chocolate fix. But you aren’t truly eating for two. “Women do have different calorie needs during their pregnancies, but the idea of eating for two is a myth,” says Elisa Zied, M.S., R.D., a spokesperson for the American Dietetic Association, mother of two, and co‑author of Feed Your Family Right! “Doubling up on portions or overloading on calories at meal and snack times can lead to unhealthy excess weight gain.”

You only need an extra 300 calories per day—and only after the second trimester—for healthy fetal development. This is the equivalent of one large piece of fruit and a glass of low-fat milk.

Putting on too much weight during pregnancy can cause complications including hypertension and gestational diabetes. “There is a misconception that pregnancy is a time to indulge,” says Raul Artal, M.D., professor and chair of the department of obstetrics and gynecology at Saint Louis University in St. Louis, MO. “Eating a healthy diet is one of the best ways to make sure you don’t gain too much weight when you’re pregnant.”

During her pregnancy, Hanley consulted with a nutritionist who talked to her about the importance of getting enough fiber and eating whole foods as opposed to processed ones. She started stocking her cupboards with high-fiber cereal and protein-rich peanut butter. She also began sprinkling flax seeds on her meals to boost her intake of
omega-3 fatty acids, which encourage healthy fetal brain development.

Your doctor has probably given you a list of the foods to avoid during pregnancy, so you know that un-pasteurized soft cheeses and deli meats are off-limits for the next nine months. You should also avoid energy bars and energy drinks, warns American Dietetic Association spokesperson Melinda Johnson, M.S., R.D., unless they’re created specifically for pregnant women.

“Your baby is sensitive to extra vitamins, especially vitamin A, which has been linked to birth defects,” Johnson says. “The safest bet is to avoid snacks and drinks that have been fortified with vitamins while you’re pregnant.”

Weight gain is inevitable and, for the most part, healthy during pregnancy. If you’re eating well and exercising, do you need to be concerned with the number on the scale? According to experts, the answer is yes.“Keeping your weight gain in the healthy range during pregnancy will help you lose the weight more easily after your baby is born,” Artal says.

Most doctors recommend gaining 25 to 35 pounds during your pregnancy. To stay on track, weigh yourself once between visits with your ob/gyn, even toward the end of your pregnancy when you’ll be seeing your doctor every week. Don’t stress over the scale, but use it as a tool to keep excesses in check. Your weight will creep up steadily during the last few weeks and that’s exactly what it should be doing.

“I only got on the scale every few weeks—when I got curious,” Hanley says. “It was helpful to me to see that my weight gain was progressing at a moderate pace. It made me feel that my diet and my regular walking and yoga classes were helping me gain exactly as much as I needed to, so I didn’t have to obsess over every little calorie.”

Monitoring her weight and making a commitment to healthy eating, with an allowance for occasional indulgences, paid off for Hanley. Just 11 weeks after giving birth, she has only 5 pounds to go before reaching her pre-pregnancy weight. “Although it still seems like I have a whole new body, I have to admit it feels really good to be so close to where I started,” she says.

During your second trimester, you’ll need about 300 more calories per day to support your growing baby. Here are a few healthy (and quick) snacks that are just the right size.

• Five whole-wheat crackers, a tablespoon of peanut butter, and a large apple.

• One cup low-fat yogurt, a handful of strawberries, and 2 tablespoons of mixed nuts.

• A glass of skim milk, a slice of whole wheat toast with jam, and a banana.

• Small bowl of tomato soup and 2 cups of salad with 2 tablespoons of oil-and-vinegar dressing.

• A handful of mixed nuts, a piece of string cheese, and a glass of low-fat milk.

— Jodi Helmer is a freelance writer who specializes in writing about fitness and nutrition. Her work appears in Women’s Health, Yoga Journal, and Arthritis Today.