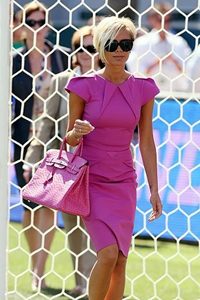 Victoria and David Beckham have just become parents for the fourth time! Posh and her famous footballer husband have welcomed their first girl to the family, and her name is Harper Seven.

The Beckhams already have three boys – Brooklyn, 12, Romeo, 8, and Cruz, 6 – so their crazy-baby-naming skills are already well-honed. So how did the new parents settle on the name Harper? And what's the deal with Seven?

Well, according to People magazine, the story's not that complicated. Harper is an old English name that Victoria's always liked, says the source. Plus, little Harper Beckham is in good company, since she'll share her classic name with novelist Harper Lee, who wrote To Kill a Mockingbird.

As for Seven, the Beckhams say that the number has a positive spiritual connotation in many languages and is considered lucky in many cultures, writes People. Additionally, the Beckhams' little bundle of joy was born in the seventh hour on the seventh day of the week in the seventh month at Cedars-Sinai Hospital in Los Angeles. And don't forget, seven is also the number of David's soccer jersey!