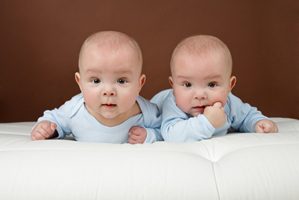 If you're preparing for pregnancy, you might be wondering about your likelihood of having a set of twins. Whether the idea of giving birth to two babies at once excites or terrifies you, here's what you need to know about the odds of it happening to you.

As you probably figured, the introduction of fertility drugs has increased the number of twins born annually in the United States. Some drugs can increase your chance of having multiples by as much as 40 percent, so it's no wonder that one in every 30 babies born in 2009 was a twin, compared to one in every 53 back in 1980.

New research has shown that the greatest increase in twins occurs in women who are over the age of 30, and those numbers account for about one-third of the overall frequency of twins. The reasoning behind this data may be rooted in the fact that more women are holding off on trying to conceive until they're in the right stage of their lives, which may not happen until they're in their 30s and feel that they're ready. This demographic may require greater assistance of fertility drugs in order to conceive than their younger counterparts.

Family history can often affect whether you have twins as well, as a certain gene on the X chromosome, which is responsible for hyper-ovulation (producing more than one egg per cycle), can be passed down from either of your parents. You're more likely to have fraternal twins as opposed to identical twins as a result of this occurrence.

So if you're over the age of 30 and are using fertility drugs to conceive, or if your family has a few sets of twins, you might want to prepare for two!