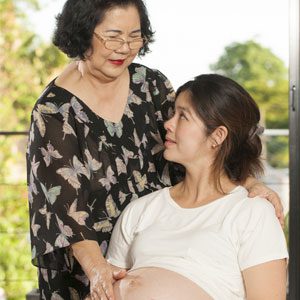 Partly out of superstition, and partly because of Jewish tradition, Liz Gumbinner of Brooklyn, NY, asked her family not to give her baby gifts until the very end of her pregnancy. “When I was six weeks pregnant, and just two days after we’d announced it,” Gumbinner says, “My overexcited mother-in-law sent a onesie set.”

There’s no getting around it: Becoming a parent changes your relationship with your own parents forever, in good ways and annoying ones. To cope with this dynamic in transition, set boundaries but try not to hurt feelings. “Any issues need to be addressed in a loving, constructive way before the baby is born,” says Arthur Kornhaber, M.D., founder and president of The Foundation for Grandparenting in Ojai, CA. If these issues come up, here’s how to take care of them with a little compassion.

You didn’t ask for advice…

You already know that everyone has opinions about your pregnancy, including your parents and your husband’s parents. This guidance isn’t always wanted—or even relevant. As Kornhaber says, “Things are different than they were when your parents and in-laws were having babies, and they need to be educated about what’s going on now.”

Take Andra Davidson in San Francisco. Working out had been part of her weekly rou tine for most of her life, so “one of the first questions I asked my ob/gyn was what I could and could not do exercise-wise,” she relates. Davidson’s doctor assured her that she could keep up the same activity level while pregnant, as long as she felt good and paid attention to the signs of overexertion. Even so, Davidson’s mother- in-law lectured her throughout her pregnancy about how she shouldn’t run or lift weights.

Taking her mother-in-law to a doctor’s appointment, or even asking her to call the ob/gyn so she could hear the advice firsthand might have helped, Kornhaber says. “That way there aren’t any direct confrontations, and the grandparent is getting the information from the source,” he adds. Another option is to research the topic yourself and provide the information, simply saying, “My doctor has assured me that I can—and should—exercise. Here’s an article I found about it.”

But they gave it anyway…

No matter what, your in-laws and even your own parents will disagree with decisions you make during pregnancy. Laura Gendron of Clovis, CA, was very organized while preparing for the birth of her twins. She found out the sexes (a boy and a girl) and decorated the nursery accordingly. Her mother didn’t like that at all. “Mom thought everything about the birth should be a surprise,” Gendron says.

“It’s OK for you to make choices and decisions that are different than your mother’s or mother-in-law’s,” says Susan Bartell, M.D., a psychologist specializing in parents and children in Port Washington, NY. “If they disapprove of your choices, so be it. Deal with it in a sensitive way.”

For example, Gendron could have explained to her mother that having twins was enough of a challenge, and that finding out the genders and preparing accordingly would make it easier and less stressful for her when the babies came home. And although her mother’s point of view was different, that she hoped her mother would respect her decision.

And it was totally outdated

Although her parents and in-laws were supportive during her pregnancies, Robyn O’Brien of Boulder, CO, acknowledges that updated nutritional guidelines and ready access to food information was something the older generation didn’t have.

“I was always trying to make sure that I was eating things that took care of my body’s needs as well as the needs of my growing baby,” says O’Brien, who now has four children. “My mom thought I was a bit over the top when it came to my researching the role that nutrition plays in pregnancy, but I knew that I wanted to give my baby the best start possible, so I took her comments in stride.”

Bartell says O’Brien handled this issue well. “Instead of getting angry or frustrated with her mother, she recognized that she was doing what was right for herself and her baby medically, as well as what felt right emotionally.” Expending the energy to prove her mother wrong wasn’t necessary.

Working through problems that arise with caring and confidence will ensure a continued healthy relationship between you, your spouse, and your parents. Remember, grandparents can be your greatest assets—that extra pair of hands when times get hectic or even an occasional free babysitting service so you can get a much-needed nap.

— Heather Larson, a mother of two in Tacoma, WA, has also written for Yoga Journal.