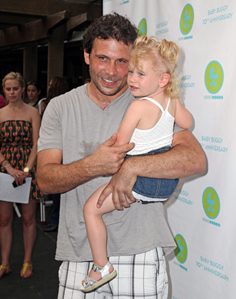 Celebrity babies seem to be making headlines in large numbers this holiday season, and Jeremy Sisto's unborn child is joining the crew. The Suburgatory actor recently confirmed the pregnancy during an appearance on The Talk, when he told the hosts that he and his wife Addie Lane are expecting a baby boy, due in March. The couple already have a two-and-a-half year old daughter, Charlie Ballerina.

Sisto told The Talk hosts that he and his wife wanted to find a unique name for their first born.

"I never really pictured myself having a family so it felt strange to name my child after anyone else alive," he said on the show. "So my wife went through the dictionary, page by page, looking for words that weren’t normally names."

It will be interesting to see what they come up with for their son! Either way, Sisto said he hopes his daughter will go by the nickname he coined for her – Chuck B. Sheryl Underwood, one of the hosts of the CBS daytime show, joked that the moniker could be her rap name.

The 37-year-old, who previously starred in Law & Order and Clueless, married Lane in October 2009 when their daughter was four months old. They had a laid-back private ceremony at City Hall in New York.

In an earlier interview with People magazine, Sisto told the source that he was enjoying fatherhood and was better than Addie at successfully putting to Charlie to sleep in the evenings. His secret? He sticks to the classics, talking, singing and reading a book. This summer, Charlie's favorite book was What Did Mommy Do Before You? How cute!