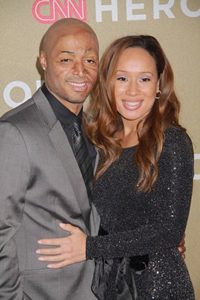 J.R. Martinez, the Iraq war veteran who stole hearts across America during his inspirational run on Dancing with the Stars, is expecting his first child with girlfriend Diana Gonzalez-Jones.

"I can't wait to show her everything," Martinez told People magazine. "I want to get her into sports and I want her to know she can do anything and be anything she wants to be."

The 28-year-old told US Weekly that his daughter could possibly get lessons from his DWTS partner Karina Smirnoff some day. The father-to-be wanted to keep his girlfriend's pregnancy private until after the show completed – which ended with a joyous victory for Martinez. He's excited to welcome another girl into his life, noting that being raised by a single-mother has helped him become sensitive to women.

In 2003, Martinez suffered severe burns to 40 percent of his body while serving in Iraq at the age of 19. While spending 34 months in recovery, he began meeting other burn victims and emerged as an inspirational speaker. He took a role on daytime soap All My Children in 2008 where he met staff member Gonzalez-Jones.

After winning DWTS and recieving numerous other honors, including the opportunity to be grand marshal of the Tournament of Roses Parade, the couple jokingly wondered how 2012 could top 2011 – but now that they are expecting a baby, they know the answer. Martinez said he wants to pass down all the wisdom that was given to him and is "over the moon" to have received the best holiday gift possible.

"Diana has a little baby bump now and it’s the cutest thing ever," Martinez told People magazine. "With the holidays coming up, this is the biggest and best gift we could get."