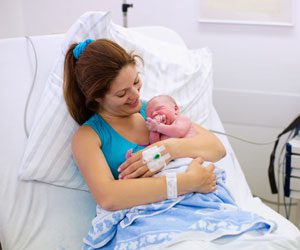 A new study published in the American Journal of Obstetrics and Gynecology suggests that longer labor times may benefit both mom and baby by lowering the risk of a Cesarean section. The research, performed by Thomas Jefferson University, followed 78 first-time moms in an effort to challenge long-held laboring standards here in the United States.

Those standards date back to the 1800s and have only changed once, in the 1980s, to amend for epidural use. Current guidelines allow women to spend two hours in active labor when they are fully dilated. If an expectant mom receives an epidural, the guidelines allow for three hours. Of course, many health care providers assess each patient individually and may allow for extra time on a case-by-case basis.

Why the two-hour rule matters

In the United States, 30 percent of babies are born by C-section. While a C-section can be a medically necessary and lifesaving procedure, it is ultimately major surgery that poses health risks and complications for a new mom. The researchers involved with this study posited that 10-15 percent of C-sections were a direct result of this outdated two-hour rule.

During the study, researchers randomly placed women into one of two groups: Group A allowed for at least one extra hour of active labor. Group B strictly followed current labor guidelines. In both groups, 100 percent of the participants received epidurals and 50 percent were medically induced.

Read more: Snack on this during pregnancy for a shorter, easier labor

Allowed to labor longer, 19.5 percent of women in the first group underwent a C-section compared to 43 percent in the second group. The researchers also noted that there were no negative outcomes for either mom or baby when mom was allowed to labor one additional hour.

“A majority of women are highly motivated to have a vaginal delivery. Changing the guidelines may help many women achieve that goal,” said Dr. Alexis C. Gimovsky, lead author of the study.

What do you think of the two-hour rule? Will you be pushing your doctor or midwife to allow for more time in active labor? Share your thoughts with moms-to-be just like you in the comments below.