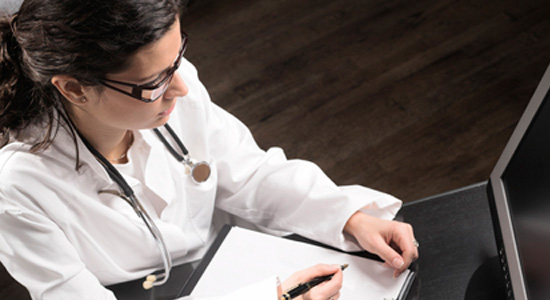 Being awakened by a crying newborn night after night takes a toll. But parents take comfort in knowing baby will eventually sleep through the night—and that they will, too.

But what about obstetricians, who spend their nights attending births? Have you wondered how your ob/gyn can deliver babies in the middle of the night and still see patients, perform surgery, and deliver more babies the next day, year after year?
Scheduling, obstetricians say, is the secret.

The average ob/gyn works just a few nights out of each month. Diep Nguyen, M.D., is 1 of 30 physicians at Kaiser Permanente Bellflower Medical Center in Bellflower, CA, and is on call four nights per month. Alice Hirata, M.D., one of eight physicians at Virginia Women’s Center in Richmond, VA, is on call every sixth night. Both doctors, who are also mothers, say this helps them balance work and family and still get rest.

“When I was in a smaller practice I was coming in every night,” Nguyen says. “I could be in the middle of dinner and someone would go into labor. But now, I stay at the hospital four or five nights a month. I prefer it this way. I’m not going to miss any deliveries. I’m right there.”

Ob/gyns say that although this means a woman in labor may not get her first-choice doctor, she will get one that is up to the task. When an obstetrician is on call, it’s for 24 hours at most. That might seem like a long time, but during their residencies most ob/gyns endured much longer hours. “The idea was that getting used to working under those sleepless conditions would prepare you for practice,” says Camilo Gonima, M.D., an ob/gyn at Institute for Women’s Health in San Antonio, TX.

Every doctor has techniques for getting through those 24-hour shifts. Gomila tries to get some extra sleep the night before, and he admits to keeping Dr. Pepper and fresh pots of coffee handy. The hospital’s sleep rooms also help, letting him grab some shut-eye as he waits for laboring women to be ready to deliver. “And I know that if I couldn’t take care of a patient, I could ask one of my partners to cover for me,” Gomila says. “Our first priority is always safety.”

So how do the solo practitioners manage? “I am quite often up in the middle of the night,” says Katherine L. Williams, M.D., of Women’s Health and Wellness in Covington, LA, who delivers five to six babies each week. “You learn to live with it and get sleep while you can.” On weekends, Williams rotates with other ob/gyns at her hospital so she can get time with her family.

When a doctor lives close to the hospital, she’ll often wait at home until a mother is close to or at full dilation. But laboring moms needn’t worry. “Nurses do not hesitate to call [doctors],” Gomila says. “If there is any concern about the baby’s or the mother’s well-being, I will come in to assess the situation immediately.” Many doctors can also keep track of patients directly by -monitoring fetal heart rhythms with their office computers or PDAs.

A mother’s pain-management decisions also factor into her ob/gyn’s schedule. If labor is progressing normally and a woman has an epidural, most physicians won’t arrive until she is ready to push. But women who’ve declined pain medication can’t wait to start pushing, so the doctor might arrive a little earlier or remain at the hospital so she can be there if labor progresses quickly.

And deliveries are just one part of an ob/gyn’s daily work. Their myriad duties also include examinations in the office, scheduled surgeries, visiting new mothers, and caring for patients who’ve had miscarriages. The schedule is hectic, but the exhilarating nature of the job makes the juggling -worthwhile, Hirata says. “Most of us in obstetrics realize that this is a 24/7 business,” she says. “We are energized by the uniqueness and the excitement of that moment.”

Cynthia Ramnarace was very happy that her own obstetrician was the one on call for her daughter Mira’s Fourth of July birth. She writes about women’s and children’s health from her homebase in Rockaway Beach, NY.