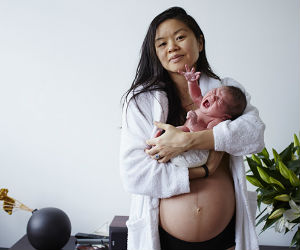 We are smitten by British photographer Jenny Lewis.

In her recently released book, One Day Young, Lewis features 45 intimate, but hardly intrusive, portraits of new mothers. For five years, she arranged visits with women in their East London homes to capture life with their one-day-old newborns. At the start, the mothers were all strangers, responding to advertisements Lewis passed out around town.

The images captured in One Day Young are striking in their candidness. The subjects are comfortable, casual, at home in their freshly postpartum bodies: One woman stands with a crying baby in her arms, her bathrobe open to reveal the telltale mark of a recent pregnancy—the linea nigra running down from her navel. Another rests her newborn on her newly vacated belly.

As Lewis told Slate.com, “It was that confidence in their gaze that I found fascinating. … It just has so much strength and not how maybe you would think of a mother who just had a baby a few hours earlier. These women are so fierce they won’t drop their gaze, they stare out at you and make you look back at them and I found that amazing; that gaze was right at me: piercing, protective, full of love, no self consciousness. Letting a stranger in to their own home at that moment but they still have that strength in their gaze I thought wow, that’s incredible.”

To take a look at several of the images from Lewis’ new book—and to read more about her creative process—read the full piece on the Slate blog.