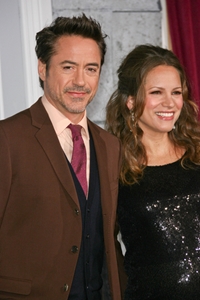 Robert Downey, Jr., star of Sherlock Holmes and Iron Man, recently revealed that he and wife Susan Downey are expecting a baby boy early next year!

The A-list actor divulged the scoop during a Tonight Show with Jay Leno appearance. He began by emphatically declaring that he had sworn to keep the gender a secret, then surprisingly declared, "We're having a boy!"

Leno gave the leading man a prosthetic breastfeeding device, which Downey Jr. congenially put on and offered to try out with the help of a member of the audience.

Downey Jr. has energetically displayed his excitement about the pending arrival of his child over the past few months and was spotted cradling his wife's baby bump on the red carpet at the 25th American Cinematheque Awards ceremony.

The couple announced the pregnancy in August, but it looks like Downey Jr. predicted there would be a bundle of joy on the way in 2010 while promoting his film Due Date. In an interview with Playboy magazine, the actor shared that he envisioned having another child within the next 18 months.

However, it appears as though the Oscar-nominated performer was thinking pink at the time. "I think we should probably try to have a girl," he told the magazine.

Robert and film producer Susan have been married for six years. Downey Jr. already has an 18-year-old son, Indio, with ex-wife Deborah Falconer.

Premiering Dec. 16, fans can see the entertainer reprise his role as the incomparable British detective in Sherlock Holmes: A Game of Shadows, which his wife helped produce.