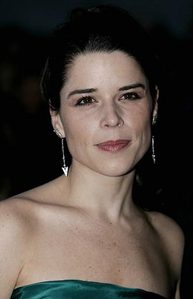 Neve Campbell, the beloved Party of Five and Scream actress, was recently seen covering up her growing baby bump at the Los Angeles International Airport with her boyfriend, JJ Fields.

Campbell was dressed in a casual traveling outfit that included a chic fedora, blue jeans, a brown sweater, comfy-looking boots and a large blue and white scarf. To top it off, she was wrapped up in a long jacket that she constantly held closed over her growing belly.

The covered-up outfit was a far cry from the bump-baring pregnancy clothes the paparazzi caught her in last month while running errands, which included flowing tops and strategically placed belts that highlighted her round midsection.

This will be the 38-year-old actress' first child, despite the fact that she's been married (and divorced) twice before. She's been happily dating Fields since last year, and it looks like they'll be a great set of parents.

"Thanks to everyone for the congratulations!" she wrote on Twitter after making the pregnancy announcement. "I'm very happy."