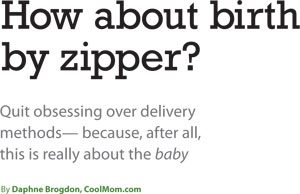 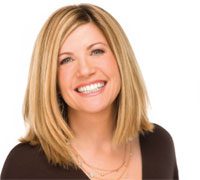 What’s with the superiority of vaginal birthers? I’ll admit it, I once was one of them. Of course this was before I’d given birth. When I was pregnant with my daughter, I envisioned a totally natural birth. I was all ready to drop her in an open field, cut the cord with a nearby branch, and wrap her up in a hemp blanket. It didn’t go like that. She was breech and late, so after much protest I succumbed to a C-section. Sure I felt like a truck had hit me for the first few days afterward, but at least I could still hold my pee in. Life is full of trade-offs.

With my second pregnancy I was considering doing a vaginal birth after Caesarean (VBAC). Then, just shy of 15 weeks, I lost my baby—an emotionally crushing experience for any woman—but I still went into labor. Holy smoke, that is painful. All that stuff I had heard about the calm moment where you can recharge ¬between the contractions is bull. On the pain scale, it peaked at 11 and would maybe go down to 7. When I woke up in the hospital the next day my mom was there. She’s a tough, understated Minnesotan who has birthed three children, two of them naturally. “Mom,” I ¬whimpered as I grabbed her hand. “Why didn’t you tell me how painful labor is?”

“I told you it’s to be avoided.” She said, dead-panned as ¬always.

“Mom, driving on the freeway at 4:30 in the afternoon is to be avoided. This was colossal pain,” I said.

“Oh, yes, it is.” She replied without hesitation.

Now, that I’m pregnant again and days away from delivering, I see how I’ve done a total 180° from my where I was 3 years ago when I was buying books whose titles were something like C-Section Evil, Evil, Evil. When I was fighting to avoid a C-section, I called my old boss and mentor Dean Edell, M.D., syndicated radio host of The Dr. Dean Edell Program. I said, “Why do they want to medicalize something so natural?”

Dean replied, “Daphne, Mother Nature doesn’t care if you die, in fact she wants people to die—it’s the cycle. Medicine tries to step in and prevent it from happening.” That’s a good point. When it comes to thinking about birth, get over yourself. I think an over-obsession on the method of delivery one way or another shows a mother’s self-absorption rather than concern for the kid. Children can be born safely both ways depending upon the circumstances. I now want the safest birth for my baby boy, whatever that is. I don’t care, because I know they both suck. One’s painful, with a quicker recovery; one’s not as much pain, but has a longer recovery. Virtue lies with neither. And in the life of your kid, it’s a blip. Everything that comes after is so much more vital. Frankly I’d like to see a third alternative. A zipper perhaps?

Aside from her role as CoolMom.com, Daphne Brogdon is a stand-up comic and host of The Fashion Team on TV Guide Channel. She can also be seen on CNN Headlines and Fox.com. She has a Star Magazine column, “Worst of the Week,” and she’s the official vlogger for pregnancymagazine.com.