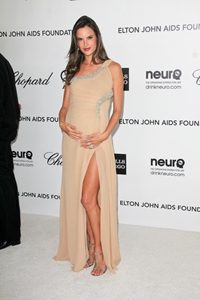 Victoria's Secret model Alessandra Ambrósio has been showing off her baby bump for a while now, but she just confirmed to People Magazine that she's having a boy and took an announcement photo at the beach!

As if it's any surprise, Ambrósio's pregnancy clothes in the picture were the definition of chic. She hardly looked eight months pregnant in a pair of cut-off denims and a form-fitting white t-shirt. She topped off the look with a cute straw hat and a pair of tortoise-shell sunglasses.

"We really tried to keep it a surprise but we were too anxious!" Ambrósio wrote on her Facebook page. "Soon, we will have a little boy to rock our world!!" She accompanied the announcement with an image of her lying on the sand in front of a message reading "It's a boy!"

This won't be the model's first child – she already has a three year-old girl named Anja Louise. Ambrósio and her fiancé Jamie Mazur are still trying to decide on a name for their baby boy, and she told People that they're looking for something that works in both English and Portuguese. She doesn't have much time left to figure it out!