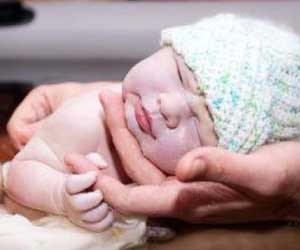 When you’re pregnant, choosing between “baby chick” or “sun porch” yellow paint for the nursery can seem like a life-altering decision. So when it comes to the big choices, such as deciding on your birth plan, considering an unconventional method might seem like more than you can handle.

But “Many modern birthing choices take the power away from the woman and give it to the medical professionals,” says Barbara Harper, R.N., founder and director of Waterbirth International. “Water birth provides autonomy and control for the woman.” The provider has no choice but to let go and allow the mother and baby to work together as a team.

The non-interventionist philosophy behind water birth is the reason Rainbeau Mars, yoga instructor and developer of Zen Mama yoga workout, decided on water for the birth of her daughter Jade. “Our bodies were meant to be able to give birth,” Mars says. She feels the drugs and monitors involved in many modern births are often unnecessary and that they complicate the birth process. “They give someone else power over your birth. It’s like saying, ‘Do it for me.’ We need to learn to rely on ourselves.”

Studies have shown water birth offers a mother several benefits. It encourages the body to release more oxytocin. Submersion typically shortens the first and second stages of labor. The buoyancy makes it easier to relax. Water also helps with the pain, although it doesn’t alleviate it. “Personally, it relaxed me enough to be able to concentrate on my labor,” Harper says.

There are also benefits for baby. More oxytocin from the mother signals the baby to release endorphins, the hormone which helps the baby feel pleasure instead of pain while exiting the birth canal. Because the mother is more in control, she is better able to position herself. Babies born in the water tend to cry less and look around more. They also tend to latch onto their mothers’ breasts sooner, and their first feedings are typically longer. “Jade was barely crying when she was born,” Mars recalls. “She was so calm and mellow.”

Mark Albini, M.D., chairman of obstetrics and gynecology at St. Mary’s Hospital in Waterbury, CT, feels water birth is a tool to help mothers who want an unmedicated labor. Albini was first exposed to water birth 12 years ago when he attended a conference on the topic with his wife Shelley; they decided to use the method to give birth to their third child. The experience was so positive, Albini decided to make water births available to more women by creating a birth center at his hospital. “I did it because I thought it was important,” Albini says. The center opened in 2000 and since then there have been more than 100 complete water births. “We’re also trying to integrate water with more traditional births,” he says. If you’re uncomfortable with your baby being born into water, you can sit in a tub until the point of crowning and then move to a bed. The water will help you relax and ease the pain of contractions.

There are limited numbers of hospital-adjacent birthing centers like the one run by Albini, and the majority of water births in the United States are at home with a midwife; but things are changing. Harper would like to see the US follow England’s lead. “Any hospital in the UK will offer a water birth,” she says. “That’s the kind of service we need here.” Water births are also common in Germany, Belgium, Holland, Norway, Switzerland, Austria, and New Zealand. “These countries understand the benefits.”

In America, water births account for less than one percent of total births. And there are some worries that come up with such a niche procedure. “The first question any woman asks is: ‘Won’t my baby take a breath underwater?’ ” Harper says. It’s not possible to take a breath and drown. Water is a similar environment to being in utero; it eases the transition. Once the baby’s head comes into the air, he will take his first breath, but not before. Another common question is: Won’t it be messy? Amazingly, the blood loss is much less than it is with a traditional birth. “Generally speaking, the mother is not forced to push,” Harper says, which means there is less tearing.

Of course, water birth isn’t for everyone. Twins and other high-risk pregnancies can be closely watched during labor with waterproof fetal monitoring systems while mom soaks in a deep bath. Soaking is available for almost any woman, but actually giving birth in water is only for those women without any probable complications.

But if everything is normal, a water birth can be a beautiful experience. Mars fondly remembers hers. “There’s no way I’d consider giving birth without water. It helped with the pain. Jade’s father was there in the water with us; it was a great bonding experience for all of us.”

Harper encourages all women to consider their birthing options and give water a chance. “Be aware of your pain tolerance and your needs. Water provides the best non-narcotic pain relief, but there are limits.” And if you do decide on a water birth, you don’t have to take “no” for an answer from your care provider. Just make sure you end up with a birth plan that is right for you and your baby.

— Nancy Ripton is a writer, new mom, and co-owner of justthefactsbaby.com. Her writing also appears in Fit Pregnancy and Elle.