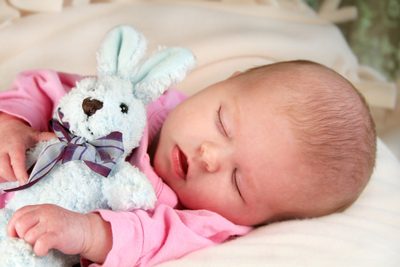 You’ll quickly learn that one of the most difficult things about bringing your newborn home is an uncertain sleep schedule. When you see family and friends, they’re probably going to ask you right off the bat whether or not your little one sleeps through the night. At this point, the answer is more than likely going to be no.

Unlike older babies, newborns don’t know the difference between night and day. They also need to eat every two hours, so the idea of a good night’s rest hasn’t quite developed yet. When they’re fresh out of the womb, babies can sleep as much as 16 hours a day, and sometimes even more. This sleep marathon can come in stretches of 3 to 4 hours at a time. However, as your baby grows, his or her wakefulness will continue to increase.

It can be easy to get frustrated when your baby is constantly waking up at all hours of the day, especially if you’re only taking a few weeks off from work. Your newborn’s frequent night feedings leave you feeling more exhausted than you’ve ever felt in your life.

You may run into the occasional night when baby doesn’t want to wake up and feed. While this is rare, you really shouldn’t let it happen. Most pediatricians say that a newborn shouldn’t go 4 hours without being fed. When you’re breastfeeding, you may notice that your baby gets hungry more quickly than babies who are bottle-fed. If this is the case, you’ll want to ensure that you’re getting up to feed (even when you don’t think you’ll be able to keep your eyes open).

Newborns and sleep: What you need to know

More often than not, newborns have their days and nights reversed: It isn’t uncommon for a baby to sleep more during the day and have alert spurts during the night. This proves to be more challenging for new parents because our bodies are so used to sleeping during the night. As a mom, you should try to sleep when baby naps during the day, as this will help you not be as tired when you get up to breastfeed at night. Trust us, we know how difficult this can seem to be, especially when you want to get things done while baby is sleeping. However, being rested allows you to be the best parent you can be, and remember that baby will likely adjust within a few weeks.

Babies can sleep through almost anything: New parents may be afraid to make any sort of noise when their little one is sleeping, but what they don’t realize is that newborns don’t need it to be 100 percent quiet in order to sleep. You’ll be surprised to learn that your baby can sleep in the noisiest and brightest of places. These little humans also like to have a soft repetitive noise when they’re sleeping,. This means that white noise machines, fans and even dishwashers can help send your little one off to dreamland.

Don’t expect baby’s sleep pattern to be predictable: Although newborns sleep most of the day, many moms say that a lack of sleep is the hardest part about having a baby. It’s likely because they’re not only getting up throughout the night to feed but also because a newborn’s sleep pattern is unpredictable. Sometimes you may find that your newborn is sleeping for four hours during one nap, then only sleeps for an hour during his or her next nap.

Your baby will have his or her own sleep personality: Like adults, babies can be light or heavy sleepers. Your little one may fight off going to sleep for as long as possible or want to close his or her eyes and drift off to wonderland. Either way, you’ll quickly catch on to your baby’s sleep personality.

Don’t put anything in baby’s crib: It’s hard to think that your newborn will be warm enough without a blanket, but don’t worry, he or she will be just fine. Baby is safest in a crib on his or her back with a firm mattress and tight-fitting sheet. No blankets necessary. This helps to reduce the risk of Sudden Infant Death Syndrome (SIDS). You’ll also want to avoid putting stuffed animals, pillows and a bumper in the crib as well.

Were you surprised by any of these newborn sleeping facts? Share your comments below!