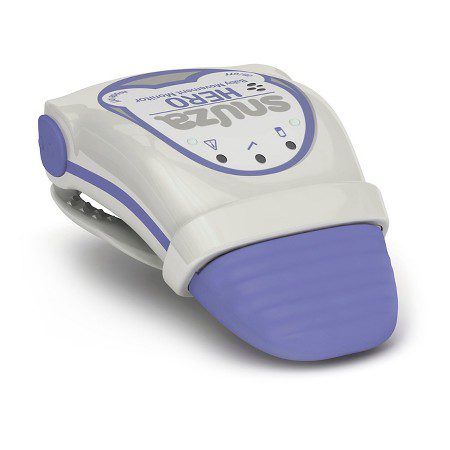 How many new parents among us have tiptoed into baby’s room to ensure he or she was breathing in the middle of the night?

Designed to lighten the mental load of overwhelmed new parents, the Snuza Pico ($109) is a small device that monitors baby’s breathing and streams all the data straight to mom or dad’s smartphone with the use of the Snuza app. Tracking abdominal movement, skin temperature, and body position, this little device offers big peace of mind for those new to parenting.

Snuza offered to send a monitor over to test drive. Here’s what I thought:

The Snuza Pico came in an easy-to-open and appealing packaging. The charging case and cable were intuitive and took a short time to fully charge before use. It’s convenient that it’s a mini USB port, so if lost, it can be replaced easily. I wish the cable plugged directly into the Snuza instead of the case, one less thing to keep track of in a house full of children.

The Snuza app was easy to find and download from the Playstore. I’m very glad that the company offers both an Apple and Android version so that multi-platform households can access the app. Having to register on the website before using the app seemed like an unnecessary step but was not difficult. The registration was relatively painless although I had to have the confirmation email sent multiple times before receiving it.

Attaching the device to my son’s diaper was pretty simple. It sits right at the top of the diaper. Baby did not appear to mind having it against his skin under his clothes or pajamas.

Once registered and logged in, the app was very intuitive. I wish they offered more guidance on the minimum and maximum alarm settings. I didn’t really know what breathing levels I should be concerned about. Babies have such erratic breathing, especially when sleeping. More guidance would have been appreciated. Instead, I Googled the information I needed and set the device accordingly.

When worn, the monitor tracks baby’s breathing, movement, and position. When the device doesn’t sense belly movement for 15 seconds, it will sound a vibrating alarm in attempt to rouse your little one.

The alarm worked as described. When baby’s breathing level dropped below my set minimum, an alarm sounded on my phone. All of the alarms needed to be manually dismissed, ensuring you won’t miss one by accident. When you go out of range, the app also beeps. I wish there was a way for the phone to be able to be farther from the Pico and still work. The estimated range was much less although I’m sure it varies home to home. Reconnecting when you go out of range is as easy as pushing a button, but not convenient especially when it’s beeping at you while you’re trying to get your newborn back to sleep.

Overall, we’re very satisfied with the Snuza Pico. It’s small and easy to use. The app functionality is great but the phone needs to be so close to the baby, it’s not sustainable for long term monitoring. The breathing monitoring which is just with the monitor alone, no app, continues to give peace of mind though. There are false alarms, but we did not experience many.