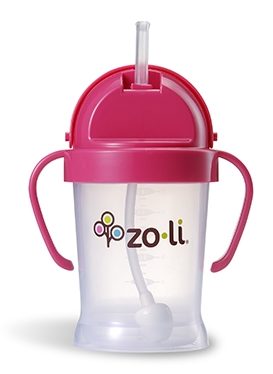 So many sippy cups, so little time. I was thoroughly confused on what sippy cup was best when we were ready to start trying ”outside the bottle” options. So of course, I do what I always do. Try a few until we figure out which one baby likes best.

The Zoli Baby Bot was a very good choice. What I really love about the Bot (and is unlike no other cup out there) is the fact that it has the weight at the bottom of the straw. The weight allows the flexible silicone straw to move in any direction around the bottom of the cup, making it so that you don’t miss an ounce of milk. A lot of straw cups we used had a gap between the bottom of the cup and the straw, which made it quite difficult towards the end of the drink to get all the liquid out using the straw. We would end up having to unscrew the top and just had our daughter drink the rest like she would a cup or leave the small amount in there. Leaving that small amount in there was sometimes frustrating because how do you explain to a nearly 11 month old why she can’t get that small amount up the straw?

The Bot has two handles on the side, which made it very easy to grip and for baby to hold up while drinking to get the last drop. It also comes in a range of nice colors that are understated, yet bright. The plastic is BPA free.

If someone asked for my opinion about which sippy cup was the best out there, I would highly recommend the Bot.

It is good down to the last drop!