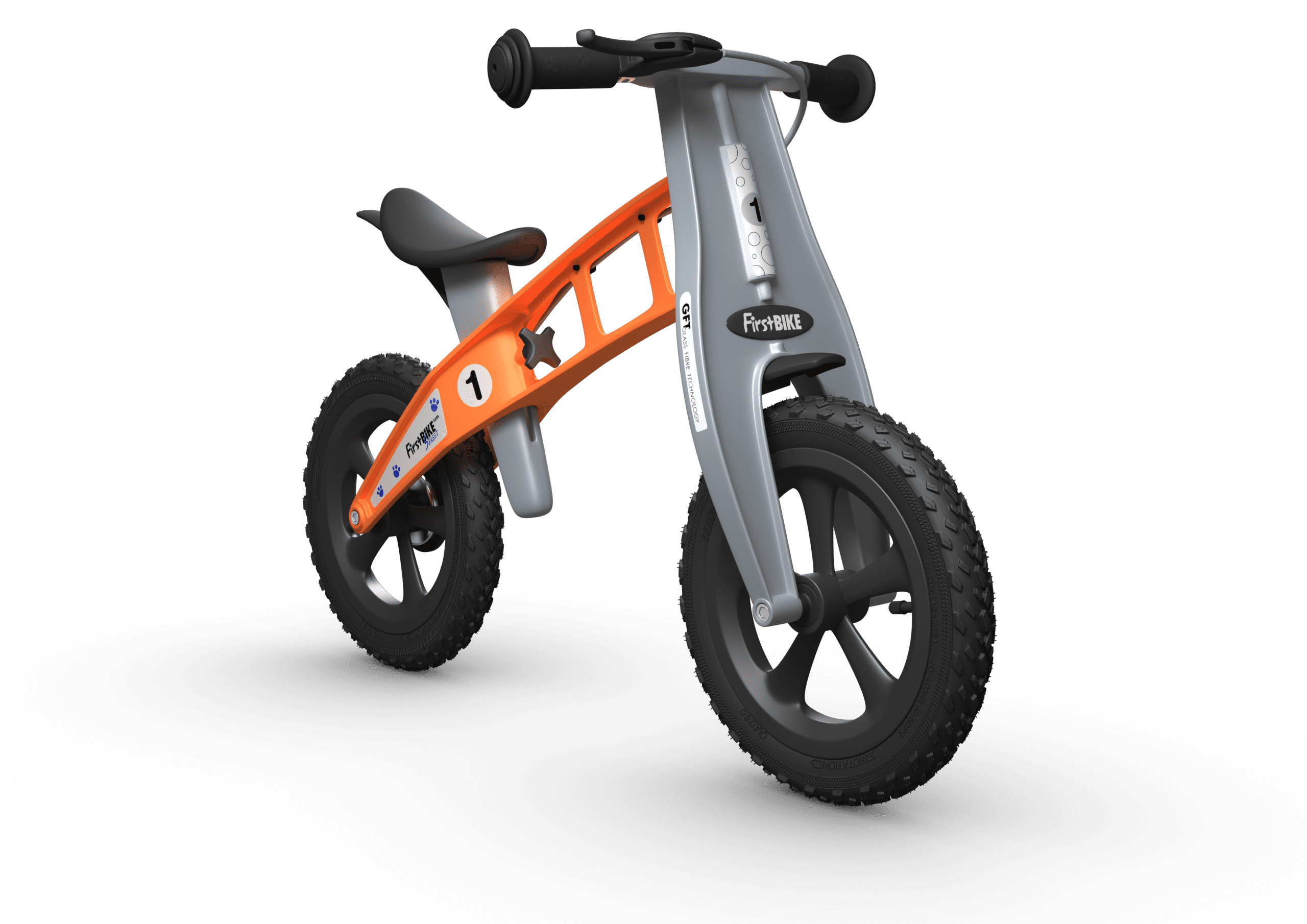 Learning to ride a bicycle is a rite of passage for every little kid. Our two-year-old boy (almost three) has been scooting along on various three or four-wheeled vehicles for about a year now. However, we haven’t been looking forward to teaching him how to ride a two-wheeled bicycle. It seems like a long and painful process…buy a bicycle, screw on training wheels, take off training wheels, chase after bike while holding seat, bandage up scrapes, kiss bruises, wipe away tears. But we seem to have found a solution in the FirstBIKE.

We were intrigued when we heard about the FirstBIKE. It is basically a bicycle without pedals. A child starts by straddling the bicycle with his bottom on the seat, feet on the ground, and hands on the handlebar. The child can then walk or run the bicycle while keeping his bottom on the seat. When the child feels comfortable he can lift a foot or two a bit off the ground. If he feels uneasy or starts to tilt over, the feet are already close to the ground and can catch the child from falling because “falling” basically just returns the child to the standing position. There you have it—an easy, no-scrape way to learn how to balance on a bike. There is no way to do this on a traditional bicycle because the pedals prevent the child from easily walking or running while on the bike.

When we received the FirstBIKE, our boy was super excited. It arrived completely built, no assembly required. It certainly looked cool…a bright green color, clean design, basket, and even a bell with a compass. You can order the bike in any one of over a dozen colors, and customize your accessories (bell, compass, basket, tire type). There is even an optional “monoski” that can replace the front tire, so that the bike can be ridden in the snow! The frame is a molded composite material (feels like sturdy plastic) that flexes a bit to absorb bumps. There is a hand brake for the back wheel, like you would find on an adult bike. There are also a number of safety features that many parents will find important. The hand brake has adjustable braking power and is a drum brake that is safer than traditional brakes. The saddle seat and safety grips prevent slippage off the bike. There is no front brake, presumably because slamming on a front brake could cause one to flip over the front of the bike. There is also a steering limiter that reduces nasty falls by preventing the front wheel from fully rotating. Together with the mudguards and reflective stickers, this is certainly a well thought-out, high-quality bike.

The first time he rode the bike, we made the mistake of having the seat too high. He was able to stand with his bottom on the seat and feet on the ground, but there wasn’t enough space between his bottom and seat to allow his legs to comfortably walk. But this was easily fixed with the turn of a knob to loosen the seat, then a push down on the seat to the desired height, and then a retightening of the knob. All done in about thirty seconds, just like an adult bike. There is also an optional lowering kit that will make the bike suitable for kids as young as 22 months.

Once we adjusted the seat, our boy was happy walking around on the bike. We tried to tell him he could try to go faster and lift up his feet, but he didn’t seem to get it. One of us then mounted the bike and showed him how to do it. (One caution: the brake is understandably not designed with an adult’s weight in mind; hard braking by an adult caused the rear wheel to get a bit squirrely but it seemed totally fine with the child rider.) He was amused watching us ride his bike. About ten minutes later, he was mounted and walking and then running the bike down our alley. There is a very slight decline, so the bike started to go a bit faster, and voila, he lifted up both feet and coasted for about two seconds. Then the feet went back down for a few steps, then they went back up in the air for a few more seconds. We couldn’t believe how easy and pain-free it was. He basically learned how to balance on a bike after watching us do it for about one minute, then walking/running on his own for about five minutes. And he had fun the entire time. There was a total of less than thirty minutes of ride time from the first time he touched the bike to when he was balancing on his own. Not once did we run after him or hold his seat. Pretty amazing.

I don’t think he would have been able to learn how to ride a bike at this age without the FirstBIKE, at least not as easily. This quick learning curve is likely because there is such a small difference in position between running while mounted on the bike and balancing on the bike. The design allows for seamless transitioning from running to balancing; this is great since it is easier to balance while moving at speed than when going slow. It was fun and painless for everyone (there have been some falls but no scrapes or crying). We definitely recommend the FirstBIKE as an alternative to training wheels.