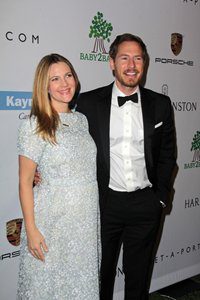 Drew Barrymore, 39,  popped out her second child with husband Will Kopelman, adding another girl to her family. Barrymore's 1-year-old Olive now has a sister named Frankie to play with. Barrymore told the New York Daily News that her attempts to hide her first pregnancy from prying eyes failed, so this time around, she decided to announce it to the world when she found out she was pregnant with her second daughter.

"Last time I never commented on it and people just stalked me the entire time," she commented to People magazine.

People magazine reported that the new mother took a decidedly un-Hollywood route during her pregnancy, indulging her cravings rather than counting calories and giving into anxiety about gaining weight.

"You're not supposed to look perfect while you're making babies," she said to People. "Making babies is the perfection."

Barrymore has also eschewed the Hollywood trend of giving her child an eccentric name despite the actress's reputation as a bit of a wild flower child. Barrymore expressed joy and relief at having another girl, noting that it'll cut down on the amount money she spends shopping this time around.

"I'm relieved I'm having another girl. I have everything I need. It's all about hand-me-downs and room sharing and all that stuff."