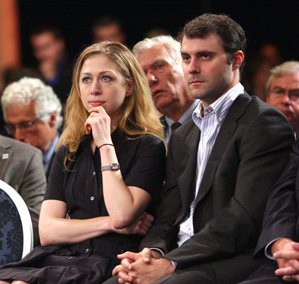 Chelsea Clinton, 34, has announced that she is pregnant with her first child, who will be the first grand child of former president Bill Clinton and his wife, former Secretary of State Hilary Clinton. Chelsea has been married to her husband Marc Mezinsky since 2010, according to People magazine. The couple expects to welcome the new baby in the fall of 2014.

Chelsea revealed to Rachel Ray in October that her parents have been nudging her toward creating a new little Clinton for some time time now.

“There is completely unapologetic pressure. In private and in public,” Chelsea said half jokingly. “If one of my parents were sitting here, they would tell you without blinking an eye that it would make them the happiest thing on earth if I were to make them grandparents, and they would say it so effusively, and I would feel a bit of pressure.”

The gender of the baby isn’t known yet, but whether it’s a girl or a boy, he or she will be surrounded by strong female role models. In addition to Hilary and Chelsea, Mezvinsky’s mother is a political player herself, currently in the running for Congress in Pennsylvania’s thirteenth district.

The little tyke will also have plenty of playmates. People reports that Mezvinsky’s side of the family boasts 18 grandchildren, the youngest of whom is only five months old!