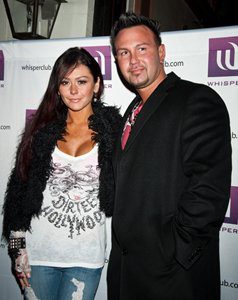 Former "Jersey Shore" star Jenni "JWoww" Farley announced on Christmas that she and fiance Roger Mathews are expecting their first child together. She made the announcement on her blog, posting a picture of the ultrasound that was featured on her holiday cards. It read, "We couldn't have wished for a better gift this Christmas! Happy holidays from our growing family to yours!" The signature on the bottom revealed that JWoww's due date is in July.

JWoww's best friend, Nicole "Snooki" Polizzi, also of "Jersey Shore" fame and her costar on the series "Snooki & JWoww," has made her excitement about her BFF's pregnancy known. After making the announcement, the two started posting snippets of their conversations on social media sites, including back-and-forth tweets and text messages including some helpful advice, like "no pushing on the toilet."

Advice like that might be why Snooki considers herself a pregnancy expert, releasing an instructional book titled "Baby Bumps," according to New York Daily News. She has a 1 1/2-year-old son named Lorenzo. Former costar Pauly D is also a recent parent, with a daughter named Amabella. We have to wonder if a spin-off of the show will ever air about the newest members of the Jersey Shore gang!