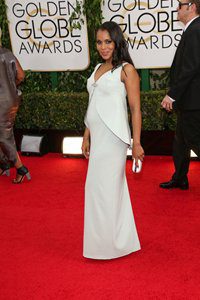 Kerry Washington and her husband, former NFL star Nnamdi Asomugha, revealed last October that they were expecting their first child together. The duo is known for keeping out of the public eye, so fans of the actress were thrilled when they finally got to see her baby bump on the red carpet of the 2014 Golden Globe Awards.

The 36-year-old star looked radiant in a floor-length, cream-colored Balenciaga gown, which was an inspiring choice for evening maternity dresses. The sleeveless dress featured a slightly flared bottom with a loose bodice that looked like its own separate vest. A glittery embellishment joined the fabric at the middle, drawing attention to her "little accessory," which she called her bump.

Washington told Extra on the red carpet that she and her husband are keeping the sex of the baby a secret, and she wasn't about to reveal the baby's due date, either.

"I am, ya know, along. I don't want to give up too much information, but it's going great," she said.

As for her "Scandal" character's famously fashion-centric wardrobe, the star insisted that she and the show's stylist, Lyn Paolo, are making it work despite her pregnancy, according to USA Today.