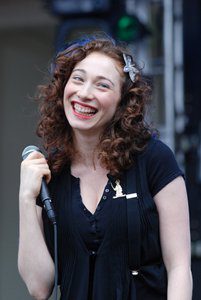 Singer-songwriter Regina Spektor's "You've Got Time," the theme song for the show "Orange Is the New Black," was nominated for a Grammy, but despite the excitement of this big first, Regina had another, bigger one that kept her from attending. She's pregnant with her first child with husband Jack Dishel.

"I would have definitely gone to LA for all the fun, in a party dress and with bells on, if I wasn't so super pregnant at the moment (!!!!!!!!!!). Jack and I are very excited to be expecting a brand new human together," she wrote on her Facebook page before the event.

She went on to say that she's been spending the majority of her pregnancy writing songs, thinking about a new record, cooking and eating soup, and counting her blessings. She told her followers that she would be watching the awards show from the comfort of her couch, and wished everyone there the best of luck.

The 33-year-old, who was born in Moscow and lives in New York, wed Dishel, a fellow musician, in 2011. We're wishing them plenty of happiness in the upcoming months!