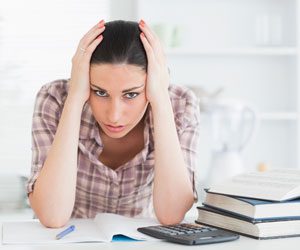 Low math scores at school? Science says you can blame it on your mom. A recent study published in the European Journal of Endocrinology suggests that pregnant women who showed lower levels of thyroid hormones birthed children who later struggled with arithmetic.

The study follows up earlier research that linked a decrease in maternal thyroxine, a thyroid hormone, to poor mental development during infancy. Until now, scientists have been unclear how such a finding would play out later in life.

This latest research, conducted at the VU University Medical Centre in The Netherlands, followed 1,196 healthy children from birth to age 5. During the study, the team collected data on each mother’s thyroxine levels at 12 weeks of gestation. Years later, the researchers returned to study the children’s testing scores when they turned five years old. The team focused on both language and math. Interestingly enough, the language scores were completely unaffected. Math, however, told a different story.

“Whether these problems persist into adulthood remains to be seen. We will continue to follow these children to answer this next big question,” said Dr. Martijn Finken, lead author of the study.

What good does the team hope their research accomplishes? For one, a way to help bridge the gap in the classroom. Hormone tests could one day help identify children who may need additional support at school. Talk about early intervention!