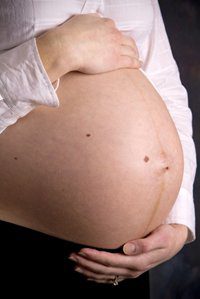 Getting ready for baby can usually take up a lot of your time, especially if you're a first-time mother who hasn't gotten the chance to hold on to all of the must-have baby supplies from a previous pregnancy.

But one of the great things about all of that running around is that you'll probably be working up a sweat while you do it, and it turns out, this is pretty important while you're expecting.

According to a recent study at the University of Madrid, moms-to-be who make time for fitness each week are less likely to give birth to overweight babies than those who avoid exercise during their pregnancies.

Referred to as "big baby syndrome" by researchers, giving birth to a chunky little guy or gal may seem cute, but it can actually mean your baby is exposed to all kinds of health risks, and may even end up more likely to be obese as a grown-up!

Researchers recruited more than 500 moms-to-be for the report, which was published in the British Journal of Sports Medicine, and all of them admitted to leading pretty sedentary lives before the study period.

To be considered sedentary, the women had to have worked out for less than 20 minutes each day or less than three times a week. Over the course of weeks 10 to 12 and 38 to 39 of their pregnancies, women were assigned training programs including 55-minute sessions of aerobic, strength and muscle-oriented exercises.

Ultimately, researchers discovered that working out during the second and third trimesters reduced the risk of having an overweight baby. Additionally, the likelihood of having a Cesarean section dropped by 34 percent.

Staying in shape during pregnancy
So, what does this study mean for you? Well, if you're expecting a baby and you can honestly say you haven't worked out as much as you should, you don't need to sweat that – just start working up a good one at the gym!

Most health experts agree that women should try and flex those muscles as often as possible – and is comfortable – during pregnancy because it can be a fantastic way to maintain energy levels and promote overall good health.

Fitness doesn't have to be super intense to be effective, and most ladies who are sporting a baby bump can have a great time just doing low-impact aerobics or swimming. And, for women who are not as used to being active, walking for at least 30 minutes a day can be a good start!