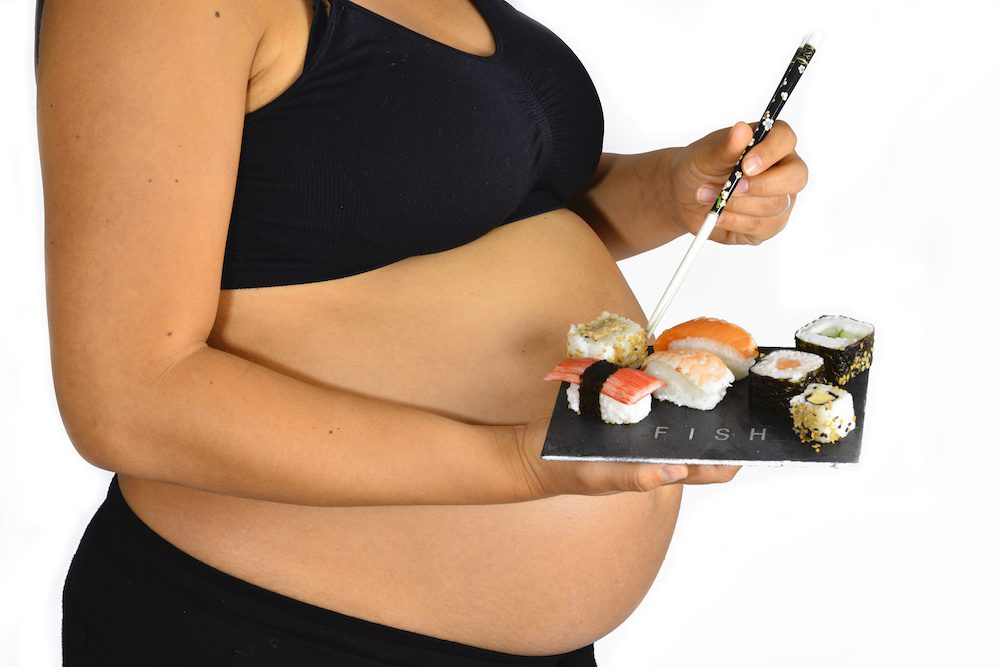 As soon as you find out that you’re expecting, you’re going to be confronted with a list of things you can’t do while pregnant. You’ll hear them from your doctor, your friends, your family members, your baby books and the pregnancy blogs you read. You’ll be told to drastically cut back on alcohol consumption, avoid sleeping on your back, be careful not to do certain exercises and skip eating specific foods. You may even get advice not to eat sushi during pregnancy. It’s a lot to take in, but it’s important for the health of your unborn baby. So, can you eat sushi during pregnancy?

One thing you may have heard is that eating fish during pregnancy is dangerous. And, if eating fish is supposedly unsafe, eating raw fish in sushi must be even worse, right? Maybe not. According to the National Academy of Sciences Institute of Medicine, most seafood-related illnesses stem from shellfish – not fish. The risk of getting sick from seafood other than shellfish is 1 in 2 million, compared to 1 in 25,000 from chicken. Recent research hasn’t uncovered any serious risks that sushi imposes on pregnant women, but there are some types that should still be avoided. Here’s what you need to know about fish and pregnancy.

Mercury levels
One of the main reasons why people think pregnant women should stay away from fish is because some types can have high mercury levels. High exposure to mercury can affect brain development and negatively impact the nervous system. Certain types of fish are higher in mercury than others, which means that pregnant women only need to avoid these species. If you’re planning dinner, keep shark, swordfish, tilefish, marlin, mackerel and tuna off the menu.

Parasites
Another concern is that fish might have parasites that could cause health problems, particularly when eaten raw. However, farmed fish, which are often used in sushi, are much less likely to have parasites because of the way they’re raised. Not to mention, when you order sushi from a restaurant, the fish was most likely flash frozen for transport, and that kills the parasites. Cooking fish also eliminates concerns of parasites.

Benefits of fish
Fish actually has a lot of health benefits for women and their unborn babies. For example, studies have shown that eating fish can help reduce anxiety levels during pregnancy, and too much stress can lead to premature birth and low birth weight. Eating oily fish like salmon during pregnancy has also been shown to positively affect children’s eyesight and IQs. Fish is a great way to get beneficial omega fatty acids and other important nutrients that women need.

Safety precautions
Many doctors now believe that it’s OK for pregnant women to have two servings of low-mercury fish per week. Talk to your health care provider to see what he or she has to say about the matter. If you’re still hesitant to eat raw fish during your pregnancy, don’t be afraid to ask questions about how the sushi is prepared when you buy it. Ask whether it was flash frozen and where the fish came from, and re member to avoid raw shellfish and high-mercury fish. So yes, you can eat sushi during pregnancy if you’re careful what sushi you eat and how much you can consume.

Sushi options
If you’d like to stay on the safe side and avoid raw fish in your sushi, you still have other options. There are many types of sushi that are made with just vegetables, while some varieties are made with cooked fish. Cooked shrimp and cooked crab are often served in sushi restaurants, and tempura is an option too. Next time your friends are going out for sushi, you don’t need to reluctantly decline the invitation if you talk to your doctor and are smart about your choices.