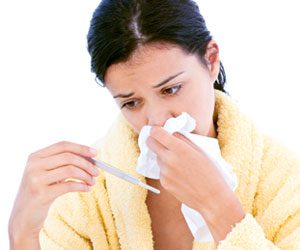 Pregnancy may guarantee you a seat on the bus, but it doesn’t grant you a free pass from germs. In fact, your developing baby puts your immune system into relaxation mode, making you more susceptible to everyday illnesses. This dip in resistance may seem counter-intuitive, but it’s crucial—if your body didn’t surrender to foreign bodies, it might actually reject your fetus.

Fortunately, most doctors agree that common germs won’t impact baby’s health. “The protective barrier between the placenta and the uterus protects the unborn against things that ail mom,” explains Jeff Kalina, M.D., associate medical director of emergency medicine at The Methodist Hospital in Houston. “The diseases that pass from mother to baby occur during birth, not before.”

To protect yourself, just practice common sense: Steer clear of people who are sick; keep your hands away from your eyes, nose, and mouth; and be a stickler for regular hand-washing. And of course you should already be getting good nutrition and adequate exercise, both of which boost your immunity.

Luckily, if you do get sick, you have plenty of safe remedies at your disposal.

Unless you conceive in March and give birth in December, part of your pregnancy will coincide with the cold season. But a cold is rarely cause for alarm. Extra rest, plenty of fluids, inhaled steam, and a warm-water gargle typically ease symptoms.

Do you need medication? Probably not, says Sharon Phelan, M.D., professor of obstetrics and gynecology at The University of New Mexico School of Medicine in Albuquerque. Tylenol Cold or Sudafed may help if you’re having trouble breathing or sleeping, but Phelan warns that some expectorants and decongestants tend to make a woman’s—and her baby’s—heart beat faster. Although this isn’t a danger, it might make you feel nervous or agitated, especially because your heart rate is already elevated due to pregnancy.

If you contract a stomach virus, your first line of defense is drinking lots of fluids. “If you can’t keep fluids down, contact your doctor,” advises Leah Kaufman, M.D., the obstetrics and gynecology residency program director at Long Island Jewish Medical Center in New Hyde Park, NY. Because your baby’s better off with a hydrated mama, most doctors will suggest medication to relieve nausea. To treat diarrhea, Imodium is considered safe; and for fever, use Tylenol. 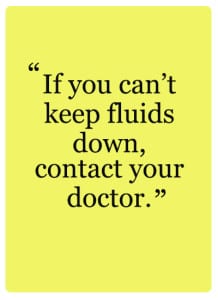 Flu symptoms can be more severe when you’re pregnant and linger longer than if you weren’t expecting. Worse, the flu can develop into pneumonia, which could threaten baby’s health due to severe, prolonged fevers. That’s why the Centers for Disease Control and Prevention advise women who will be pregnant during flu season— November to March—to get a flu shot. (But skip the nasal-spray vaccine, FluMist, which is not considered safe.)

If you get the flu anyway, which sometimes happens depending on the success of the vaccine, drink fluids and rest. “The impact on the baby’s health really depends mostly on the mother’s caring for herself,” Kalina says. Honey-based lozenges can relieve congestion and cough. Once again, acetaminophen is your best bet to relieve aches and bring down your temp.

Avoid antiviral drugs such as Tamiflu and Relenza. Other medications that you should leave on the shelf include aspirin, ibuprofen, and anything with guaifenesin, an expectorant.

When To seek help

If you have a temperature above 101 degrees Fahrenheit, severe abdominal pain, respiratory problems like wheezing, or are unable to stay hydrated, notify your primary care doctor or internist—in addition to your ob/gyn—to get advice about what to do next, and be sure to mention that you’re pregnant.

Happily, most sicknesses can be treated easily and safely. “Rest easy,” Kalina says. “Even as you suffer, your baby is safely cradled.”