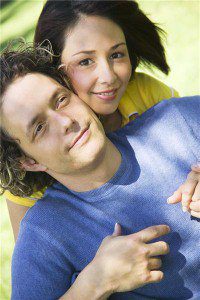 The thought of a man experiencing morning sickness, heartburn or back pain as a result of a pregnancy seems completely ridiculous. Obviously, there's no baby in that belly of his that could be responsible for the symptoms. Why then do so many men report feeling pregnancy symptoms when their partners are expecting? Sympathetic pregnancy, also known as Couvade syndrome, is a strange phenomenon.

In Couvade syndrome cases, men who are otherwise deemed perfectly healthy start experiencing common pregnancy symptoms such as nausea, abdominal pain, bloating, weight gain, appetite changes and sleeplessness. While they're often downplayed by female partners who have absolutely no sympathy (why should they if they're experiencing the same things?), these symptoms are often very real. But why do they happen?

Doctors don't really know why Couvade syndrome occurs, but there are many speculations. Some think that the symptoms are brought on by psychological issues, such as anxiety about becoming a father, empathy for their pregnant partners or jealousy about the fact that they're not capable of carrying a child. It's similar to the idea that simply believing that you're sick can actually bring on symptoms.

Others believe that there are physical explanations for the symptoms. For example, weight gain may be the result of comfort eating in an effort to calm worries about being a parent, while mood swings and sleeplessness could stem from taking care of a pregnant partner. Canadian studies have also suggested that certain hormone shifts may be responsible, as fathers tend to experience hormonal changes that prepare them for fatherhood.

Either way, if your partner starts complaining about strange symptoms while you're pregnant, it's important to take him seriously. Try helping him deal with pain or anxiety with the things that help you. It might seem totally weird, but it may bring you two closer together!