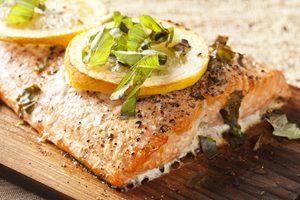 One minute you're staring at a pregnancy test waiting for the strips to turn pink – and the next minute, you're turning your life upside down to accommodate your future child. Or at least that's the way it sometimes feels, what with all the lifestyle and dietary changes pregnancy asks of you. You know why you need to nix alcohol and why you should load up on fruits and veggies. But what's the science behind adding a fish oil supplement to your diet? We get to the bottom of it for you.

Docosahexaenoic acid, or DHA, is an essential fatty acid that supports baby's brain and tissue development. Also known as an omega-3 fatty acid, DHA can be found primarily in fish such as salmon, catfish and shrimp. Omega-3 fatty acids permeate the placenta, traveling to your developing baby and aiding in the growth of his or her nervous system.

A 2004 study suggested that babies whose mothers consumed high levels of DHA had greater attention spans and reached developmental milestones earlier than babies who were born to mothers with lower levels. The research showed that up to six months of age, the first group of infants were, on average, two months ahead of their peers developmentally.

In addition, the journal Child Development reported that the boon DHA provides infants lasts well into childhood. Children whose mothers ingested a higher level of it during pregnancy – and who consumed DHA themselves – scored better on cognitive tests than those children with lower levels.

How to get it

Armed with this research, you're probably wondering, "Well, what next?" Researchers haven't determined exactly how much DHA pregnant women need – but they do all seem to be in agreement about one thing: Expectant mothers need to boost their intake of omega-3 fatty acids.

The situation gets a bit, well, fishy where mercury in concerned. The U.S. Food and Drug Administration released an update earlier this summer, encouraging pregnant women to boost their fish intake – but to do so wisely. Eat 8-12 ounces of fish each week, the FDA advises, but steer clear of swordfish, mackerel and shark – all of which are high in mercury which is hazardous to a developing fetus. Instead, add salmon, tilapia, cod and canned light tuna to your plate.

Are you eating more fish now that you're pregnant? Share your tips and tricks for boosting your DHA levels in the comments below!