The greatest women’s golfer of our time is designing a challenging new course for herself—motherhood—where the only birdies she’ll see will be in her new nursery. Here’s how she stays fit to prepare for the best birth

“I love to be in control,” says golf’s leading lady Annika Sörenstam, now in her third trimester with her first child. “But during pregnancy, you’re not. You have to let go and allow the body to do what it naturally needs to do.”

That’s not easy for Annika, 38, who’s had a firm grip on the LPGA tour since she began rocketing drives off tees back in the early ’90s. Since then she’s won 89 tournaments, including a whopping 10 majors. Today, retired from golf, Annika is setting her sites on the thankless sport of parenthood. “It’s the most natural thing to give birth—but when it happens to your body, it feels really unnatural!”

To deal with her rapidly changing state, Annika and trainer Kai Fusser developed a prenatal workout to keep her finely tuned body as firm as a five iron. “Annika has been the most dominant female golfer in history and was twice given the Best Female Athlete ESPY Award,” Fusser says proudly. “She’s one of the fittest female athletes out there, and after childbirth she wants to regain her fitness quickly. This workout will give her a head start.”

But instead of inventing a unique prenatal regimen, Kai and Annika adjusted her current routine to conform to her new shape. “Right now she’s doing the same things, just in moderation,” Fusser says, “same muscles, only with less range of motion—and we focus on the core.”

Kai and Annika speak obsessively of “the core.” Each exercise begins and ends with an engagement of the core. “We start every movement by pulling in the belly button and tilting the hips slightly forward,” says Fusser. “This will engage your transversus abdominis [muscle] to put you in a neutral pelvic tilt position to improve posture—and it’s one of the muscles used during childbirth.”

Here’s how Annika’s preparing for her next major event… 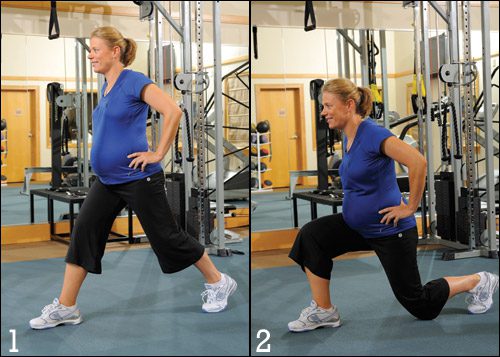 “Lunges are great for general leg strength as well as balance. I’ve gained weight with the pregnancy, so I need to offset that weight gain with leg strength.”

Start in the lunge position and lower and raise the body
without pushing back to the starting position. Your knee
should not travel in front of your foot. Stay focused on keeping your spine straight. Go up and down in a standing still position. Alternate legs. Do 6–10 reps for 2 or 3 sets. 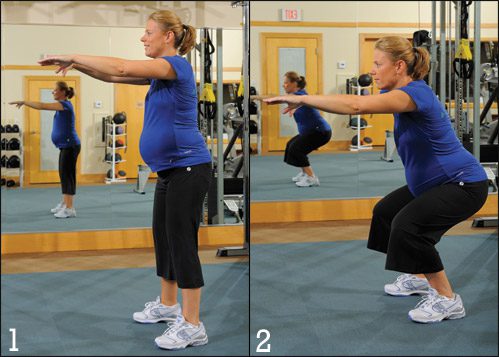 “I try to focus on the glutes during each workout. It helps with getting familiar with my unbalanced body!”

Stand with feet shoulder-width apart. Engage your abs and shift your hips back. Keep your knees over your feet. Go down slowly and then back up again as if you were sitting on and getting up from a chair. In fact, if you’re a little worried about your balance, you might think about putting an actual chair behind you. I do this holding a 10-pound weight to increase the load. Do 6–10 reps for 2 or 3 sets. 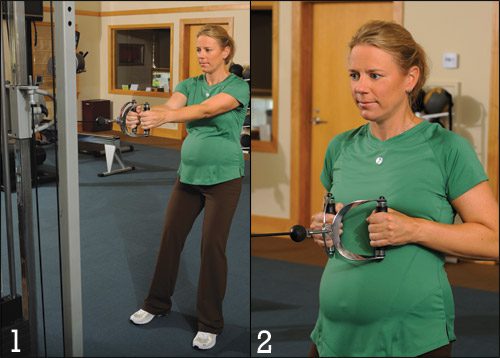 “This has been a favorite from the beginning of my pregnancy—it’s good for legs, back, chest, arms, shoulders—and it’s a great exercise to prevent hunchback.”

Standing up, hold the cable (or exercise band) about chest high and horizontal. With a loose grip, pull in toward your belly button while rolling your shoulders back, which takes pressure off your chest. To connect your abs to this exercise, alternate flexing each knee. Do 6–10 reps for 2 or 3 sets. 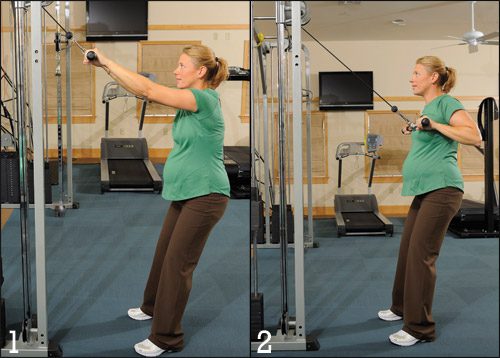 “A really good upper-body exercise—kind of a variation of a pull-up. There’s no twisting or much stomach movement, and it’s very good for the back.”

Stand up with a wide grip bar above you (you can also use an exercise band). With a loose grip, pull the bar down and in toward your chest and draw your shoulders back at the same time. This is a good exercise for those in the later stages of pregnancy. Do 6–10 reps for 2 or 3 sets. “When I was training for the tour, I used to do these on the ground with 50 lb. weights on my back! It’s different now, of course. There’s less arm pushing and more abdominal strengthening.”

This is basically a push-up against the wall rather than on the floor. Stand arms’ length away from the wall, so that your hands are touching it. Keep your body straight. Engage your abs, and then allow your body to lower into the wall, feeling your arms and shoulders as well. When you push back off the wall, engage your abs again by drawing in your belly button. Do 6–10 reps for 2 or 3 sets.

“This is great overall for your arms and biceps, and it’s a terrific golfing exercise! It also contains roughly half of what golf is—shoulders, arms, posture, and balance.”

Start with a 3-pound dumbbell loosely gripped in one hand behind your hips, with your palm facing back. As you extend your arm to the ceiling, twist as you start curling up, and end with your palm raised and facing forward. Lower the weight slowly with the reverse motion. Do 1 or 2 sets of 12 reps on each side. The news of your retirement came as a surprise.
Not to me and to those who know me. If I can’t play up to the standard I set for myself, I don’t want to play.

Won’t it be strange for you to not play golf after dedicating yourself to the game for so long?
I’ve been living and breathing golf for 15 years now and I have achieved everything I want to achieve. Now there are other things in life—like a new baby!

What have you missed during your pregnancy?
I’m used to being very active; I ski in the winter, and I’ve had to be careful. I love to eat, and some things I love I cannot eat, like sushi. I like to wakeboard, but that’s a no-no. It’s hard for me to slow down. Unless I’m really tired, I rarely rest. And I love a glass of wine on occasion, too, but of course there’s no alcohol right now. It’s not that hard—you just have to be disciplined. But I’m happy to do it, because it’s for something so great.

Did you talk to any other golfers on the tour about motherhood? Like Tiger, maybe?
Yes, a few, but not Tiger. But it’s one thing to listen to their stories, and it’s another to relate it to what you go through in your own life, which is very unique. I admire the players that are mommies and still playing at a high level. I love my life and I have a lot of other things I do and businesses I run. This baby is our first priority.