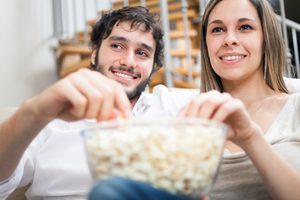 Get the popcorn popping! We have five movies to veg out to while you wait for delivery day.

Keaton's J.C. Wiatt is a high-powered business executive whose life plays out in the board room – that is, until she inherits her deceased cousin's baby. Shocked and totally unprepared, Wiatt's life unravels hilariously. It's not long before motherhood has completely consumed her, causing her to lose her job and her boyfriend. On a whim, Wiatt whisks her little one away to a Vermont farmhouse with the hopes of rising to the occasion of raising a baby. More laughs and a sweet romance ensue.

What do you get when you mix commitment phobia and a new pregnancy? In the case of this 1990s comedy, that would be absolute hilarity. Moore stars as the ever patient Rebecca, whose unexpected pregnancy sends her boyfriend Samuel into a panic. Ready to leave him, Rebecca envisions raising her little one on her own – but Samuel realizes the error of his ways and goes chasing after her. Williams stars as a nervous Russian obstetrician – definitely not the guy you want come delivery day.

Who could forget this 1980s classic? Three unlikely men – an architect, a cartoonist and an actor – step into the role of dad when a baby unexpectedly lands at their doorstep. It's not long before their shared penthouse goes from a swanky existence to one littered with diapers and baby toys. Their journey is funny and sweet and the outcome predictably heartwarming.

When a full-time thief falls head-over-heels with the cop who's always catching him, this couple's journey to parenthood takes a dark and funny turn. After discovering that they can't conceive naturally, the two head out to steal a baby to call their own.

Putting a new twist on the old phrase "home is where the heart is," this indie film finds a 30-something couple on the road to set down roots for their new family. With their first baby on the way, and their own parents on the move, these two are on the hunt for a place to call home. During their travels, they reconnect with old family and friends as they try to discover where they belong.

Have you seen any of these movies? What flicks are we missing? Let us know in the comments below!