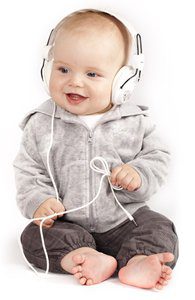 You’d probably do anything possible to make sure that your baby grows up to be at the head of his or her class, so you might’ve done a bit of research into how to make your baby smarter. Somewhere among the omega-3 fatty acid-rich diets and Baby Einstein DVDs, you may have come across the suggestion of playing classical music for your baby – perhaps even while he or she is still in the womb. But is there any truth to this? Can hearing classical music actually make your little one smarter?

A study conducted in 1993 showed that classical music temporarily improved college students’ scores on two parts of a general intelligence test. This led many parents to believe that playing music for their babies – even in utero – could help boost their IQ and enhance other aspects of their cognitive development, like stronger family ties and improved health. Since then, an entire line of “Mozart Effect” CDs for newborns, babies, adults and even car travel have given people hope. But is it really classical music that’s responsible for smarter babies?

A subsequent study showed that classical music improved preschoolers’ performance on paper folding and cutting tasks. However, the kids improved just as much after listening to stories or hearing children’s music. Their performance also relied on how much they liked the stories or music they heard, which led many to believe that “enjoyment arousal” is actually what can improve children’s brain function – not classical music in particular.

However, a more recent study from researchers at the University of Helsinki, published in the journal PLoS One, suggested that playing music for babies in the womb could actually boost their brain development. The researchers asked a group of women in their third trimester of pregnancy to play “Twinkle, Twinkle, Little Star” at least five times a week. Another group didn’t play any music during their third trimester. After the babies were born, the team measured their brain activity when they listened to “Twinkle, Twinkle, Little Star” and a similar song. They repeated this test when the babies were 4 months old.

The team found that the babies who heard the song while they were in the womb had much stronger brain activity when they heard the same song compared to when they heard the similar version. The effect was the same when they were 4 months old. This led the researchers to conclude that the period between the 27th week of pregnancy and six months after a baby is born is critical to the development of the auditory system.

If you want to give it a try, there’s no harm in playing music for your little one when he or she is in the womb. You don’t need to actually put headphones on your belly, though. Just play the music on your stereo at a normal volume – amniotic fluid is a good sound conductor, so your baby will be able to hear it and it won’t be too loud.