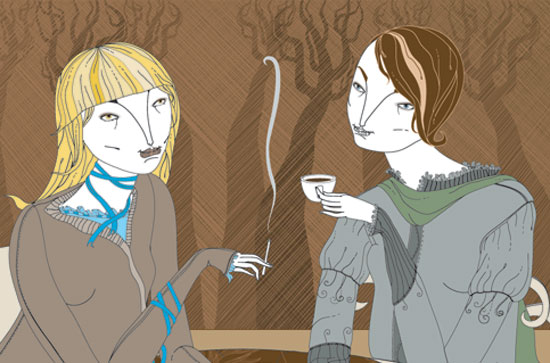 From that surreal moment when you see two pink lines confirming you’re pregnant, you feel a flush of excitement and, at the same time, one stunning realization: “The party’s over!” No more Sunday mimosas, Starbucks mochas, smoke breaks, and working ’til all hours. Welcome to pregnancy, the ideal time to bust a bad habit or two that you’ve been neglecting to face. Here are five vices to quit now for your health—and your baby’s.

Chain smoking, social smoking, and everything in between.
A recent Centers for Disease Control and Prevention study found that women who smoke in early pregnancy—pre-conception to the end of the first trimester—were more likely to give birth to infants with congenital heart defects than women who didn’t smoke during the same period. Maternal smoking has also been linked to premature placenta detachment, low birth weights, and Sudden Infant Death Syndrome.

Laura Riley, M.D., medical director of labor and delivery at Massachusetts General Hospital in Boston and author of Pregnancy: The Ultimate Week-by-Week Pregnancy Guide, says some smokers can quit cold-turkey during pregnancy, but it’s challenging and the relapse rate is high. “An addiction usually requires a multi-pronged approach, including behavioral therapy and a nicotine patch,” Riley says.
Have a thorough chat with your doctor about the risks and benefits of using the patch during pregnancy. Look to your health plan for smoking-cessation resources, like support groups, at low or no cost. Some states offer free help, too; Washington’s department of health just improved its quit line, 1-800-QUIT-NOW, especially for pregnant women. If you’re still trying to conceive, quit smoking now.

Extra cups of coffee.
One morning coffee is probably OK, Riley says, because the association between miscarriage and caffeine is notable when women consume more than 200 milligrams a day (a regular 8-ounce cup has about 140 milligrams). But substitutes work wonders for some moms who want to abstain entirely: “I kicked a caffeine addiction when I was pregnant with each of my children by sucking on coffee-flavored hard candies whenever I was craving a cup of coffee,” says Nettie Hartsock of San Marcos, TX.

Judith Wright, a life coach and author of The Soft Addiction Solution: Break Free of the Seemingly Harmless Habits That Keep You from the Life You Want, suggests adding healthy habits that give you the same result as your soft addictions. Besides coffee, what else gives you a jolt of energy? Take a brisk walk around the block, have a juicy catch-up chat with a friend, or, if you have the luxury, indulge in a power siesta.

Saying “yes” all the time.
Wright says that the act of saying no is like working out a muscle with heavier and heavier weights, and pregnancy is a great time to practice, because people give you slack. When Marybeth Cale of Wilmington, NC, became pregnant, she was determined to step back a bit from her career and community responsibilities. Others took over her tasks and exceeded all expectations, which was extremely liberating. “Now I like to think of my life as very balanced because of the conscious decision to kick that habit,” she says.

Missing breakfast—and lunch.
Skipping meals is unwise for mom and baby,” Riley says. You need a reasonable number of calories per day based on your weight, the number of fetuses you’re carrying, and other similar factors. Avoiding food will make you hypoglycemic—meaning your blood sugar dips and you feel dizzy. “If you have nausea, not eating won’t necessarily help,” she adds. Quell the quease by staying hydrated. Try smoothies, lemonade, ice pops, sliced cucumbers, or watermelon wedges.

Going for drinks.
Because experts don’t know for sure if any level of alcohol consumption is safe during pregnancy, Riley counsels her pregnant patients to refrain from drinking. But if you had a couple glasses of wine before you found out you were pregnant, don’t let guilt keep you up at night. “Stopping the alcohol as soon as you are aware of pregnancy is fine for the vast majority, and it’s unlikely that one or two glasses will cause fetal alcohol syndrome or fetal effects,” Riley says.

Try adding relaxing activities to your life that aren’t dependent on a glass of wine. For example, you could spend the dough you would have dropped on cocktails to indulge in monthly prenatal massages. Pregnancy is a great time to pamper yourself, Wright says, and to set a pattern for self-care that will last the rest of your life.

Kick It for Good
Need more reasons to keep your bad habits buried once baby is born?

• Smoking: Nursing moms who smoke may experience a reduction in their milk supply. Baby can get a fair dose of nicotine through breast milk, as well, and this can cause nausea, colic, and diarrhea.

• Drinking: There’s no hard evidence showing ill effects for baby if nursing moms consume one glass of wine or less a day. But, according to the La Leche League, it can take 2 to 3 hours for the alcohol to pass completely through the body of a 120-pound woman.

• Caffeine: One cup of coffee a day is fine, but children of over-caffeinated nursing moms can suffer from sleeplessness and be cranky and over-stimulated.

• Skipping Meals: Nursing moms need an extra 300 to 500 calories per day. Not eating enough can interfere with your milk supply.

While she was pregnant, Vanessa Geneva Ahern conquered her diet soda addiction by drinking ginger ale and vanilla milk shakes. She’s a mother of two who often writes about women’s health.

By Pregnancy Contributor
Pregnancy Magazine draws on a wide range of editorial sources including working doctors, midwives and doulas, as well as journalists writing about fertility, pregnancy and new motherhood.