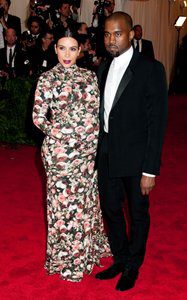 When you're looking for the best pregnancy clothes, celebrities are usually good inspiration. With money to spare, personal stylists and a reputation to uphold, you'd think they'd come up with plenty of chic outfits with cute maternity dresses and stylish casual ensembles. However, not every celebrity knows how to dress a bump. Here are six of the worst celeb maternity fashion fails.

1. Kim Kardashian
Kim takes the cake when it comes to questionable maternity wear. Several of her outfits missed the mark during her pregnancy, mostly because they were either too big or much too small. She had trouble fitting her curves into regular clothes, but she was hesitant to switch to maternity wear. Remember that awful printed dress she wore to the 2013 Met Gala? Enough said.

2. Britney Spears
Brit's definitely had her fair share of sketchy outfits over her long career, but one of her worst occurred while she was pregnant. She stepped out wearing a cropped wrap top that ended just below her breasts (revealing her entire baby bump), a tight, calf-length tie-dye skirt and cowboy boots. Maybe it would've been OK on the beach, but otherwise it was a definite no-no.

3. Tori Spelling
Usually very chic, Tori did make one memorable misstep during one of her pregnancies. She went out wearing a blue and purple printed jumpsuit with tied straps and a belted feature above her baby bump, pairing it with gold gladiator sandals. It just wasn't the type of shape that pregnant women should wear to cover their bumps.

4. Gail Simmons
"Top Chef" judge Gail Simmons wasn't at her best at the 65th Emmy Awards last year. She looked awkward in a floor-length red dress that was too baggy around her bump and featured a strange neckline and oddly cut sleeves. It didn't do much to flatter her figure.

5. Jennifer Lopez
J.Lo rarely gets dressed in the morning without looking fabulous, but she had a few weird outfits when she was pregnant with her twins. One stage appearance featured a turquoise, pink and yellow ensemble featuring a circus tent-like halter top with a billowing bottom and ruffled bell-bottom pants. It was a definite fail.

6. M.I.A.
Rapper M.I.A., known for her hit "Paper Planes," showed up to the Grammys during her pregnancy in a very strange outfit. Featuring black sheer leggings and a matching long-sleeved shirt, the outfit involved patches of black and white polka-dotted fabric over her baby bump, breasts and butt, effectively making her look like a pregnant ladybug. That's when you know it isn't working!