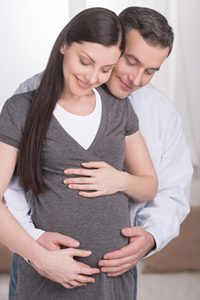 Although you're still in the early stages of your pregnancy, you'll find that some pet peeves may already be starting to settle in.

You don't really realize just how annoying some of these things are until they happen. Whether it's rubbing your belly without asking or commenting on how much weight it looks like you've gained, you're sure to find your buttons being pushed at some point.

Belly pokes: For some reason, when people see that you're having a baby they feel they have the right to come up and poke/rub your belly without asking. You may find that it doesn't bother you so much when friends and family do it, but you'll be surprised to find that even strangers on the street think that it's perfectly OK if they poke you.

Guessing the sex of your baby, and your due date: There are all sorts of wives tales out there that attempt to determine the sex of your baby. For example, they say if your belly is sitting low then you're having a boy or if you're craving sweets then it's definitely a girl. While these hold no scientific truth whatsoever, people still think they can take a whack at determining the sex of your child. They also like to guess when your baby will make his or her big debut, and sometimes even suggest that you deliver on a certain date – as if you have a choice.

The breast feeding debate: Regardless of what you decide, people tend to think that their opinion is what you should do when it comes to feeding your baby. You may find that you don't want or have the time to breastfeed, and that's OK. It can be a bothersome thing when people are constantly asking if you plan to breast or bottle feed, but try to block it out because you know which feeding method works best for you.

General advice: Whether it's tips for rocking a crying baby to sleep or how they think you should raise your child, people love giving unsolicited parenting advice. Although they mean well, as a pregnant woman you have plenty of other things running through your mind at the moment and their tips and tricks can leave you feeling a little irritated.

Comments on weight: Perhaps the one thing you never want to hear as a soon-to-be mommy is how much weight it looks like you've gained. Not only are you already aware that you could gain as much as 35 pounds throughout the next nine months, raging hormones could make you want to slap whoever had the guts to say such a thing.

Criticizing name choices: When you're trying to think of a name for your precious little one, you'll quickly learn that people aren't afraid to interject what they think you should go with, and also critique the possibilities that you're considering. They'll have opinions on what to name your boy or girl, how to spell it and may sometimes even try to guilt you into naming your son or daughter after them.

Are there any other pet peeves you can think of? Share them below in the comments!